The best overlooked album from last year is far and away a little known pop rocker called Anxiety Art by San Francisco's The Reds, Pinks and Purples.


A couple months ago I posted my favorite 2019 albums list. And what a fine list it is! Of course it's just my favorites out of the albums I was able to hear and familiarize myself with during 2019. With Spotify and other means (plus a hunger for searching) it's easier than ever before to continually find new and old music that you A) love and B) haven't ever heard before. Inevitably some good things get left off of any person's best of because you can't hear it all.

In the two months since 2019 ended I've been turned onto at least a dozen great albums from 2019 that I wasn't even aware of at the time of making my own favorites list. These include:

These are all albums I wish that I had known about in 2019 but I'm glad that I know about them now. However, for me, the best overlooked album from last year is far and away a little known pop rocker called Anxiety Art by San Francisco's The Reds, Pinks and Purples.

I know little to nothing about this band or album. It was listed on Raven Sings The Blues' enlightening best of 2019 list: http://www.ravensingstheblues.com/rstb-best-of-2019/

I wrote these songs in the Inner Richmond neighborhood of San Francisco. They came to me on walks around Golden Gate Park and shopping at Asian grocery stores on Clement Street. They are fiction and non-fiction. I recorded them in my kitchen, but we live in the future now, so some of them are coming out on vinyl in Spain. To me, they are straight pop songs with not much of a filter. The cover art is by my partner's father; he has dementia but still makes amazing pictures sometimes. Stress or bad times can drive people to make music or art. It's a relief for me to make things, so I called this record Anxiety Art. 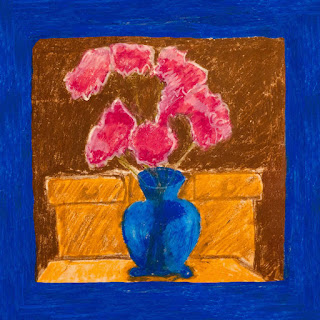 I'm not sure why this album has had such an impact on me.  New Wave, or middle of the road rock in general, is not necessarily my most preferred style. The songs are not super hooky and the musicianship - while sufficient and well formed - is not what I would call virtuosic. There are no long jams or much improvisation or experimentalism of any sort. The songs are pretty short - the two or three minute range - and have pretty basic structures. The same chord patterns, guitar riff motifs, and topics seem to show up on multiple tracks, whether intentional or by accident. It doesn't quite sound like 2019...or 1982. But oh is it addictive and gripping. The feeling the album conjures can't really be put into words - something like a mature, hopeful, melancholy. Hidden beauty. Finding pleasure in simple, mundane things. Too bad the vinyl is completely sold out. Good thing I'm also into compressed audio.

Email ThisBlogThis!Share to TwitterShare to FacebookShare to Pinterest
Be a Fan
Posted by Tanner Llewellyn at 2:14 PM