20 Years Ago, These Were My 10 Favorite Jambands 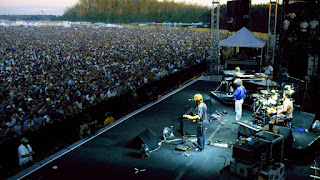 In the year 2000 I was living in the Boulder/Fort Collins/Denver area of Colorado. These would have been my ten favorite jambands.

The Big Wu
This Minnesota band had a heady allure, cultivating a strong following in CO perhaps because of their underdog quality. First of all, they wrote good original songs that you wanted to hear. The Big Wu's setlists rotated through this strong original repertoire and were of course peppered with choice covers. They did a great version of Foolish Heart by The Grateful Dead, for example. On the downside, The Big Wu could be frustratingly inconsistent. On their off nights they more closely resembled your local bar band than an act ready for prime time. I always like them though. There was a "Jerry" quality to their flubbed lyrics and inconsistency.

Keller Williams
Back then it seemed like Keller Williams could read your mind. I guess that meant he had his finger on the pulse. Keller was always extremely present at his shows, playing directly to the mood of the room. For covers, he pulled from everywhere but my favorites at the time had to be Dinah Moe Humm (Frank Zappa), Thirsty In the Rain (Peter Rowan), and Still Wishing to Course (Camper Van Beethoven). Keller's album Best Feeling proved he could write quality songs, and not just novelty numbers like Portapotty. 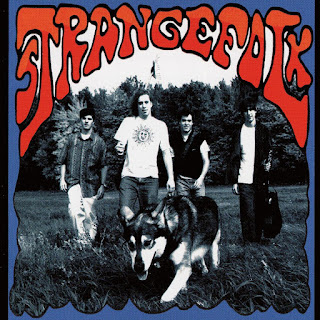 Strangefolk
Strangefolk had an original sound, powered by Reid Genauer's lyrics and songs. They were a jamband for sure, but it was sorta "jam-lite" and always with a focus on the song. Kind of like a more jammy Jayhawks but way less risk taking than Phish at the time. I don't think Strangefolk ever ventured down the twenty-minute jam road for example, but they knew what they were doing and wore the Burlington, VT brand pretty well. Reid had a great charisma and delivery that brought everything up another notch. Lead guitarist Jon Trafton played with a tasteful, understated style that hopefully didn't go unnoticed. Strangefolk's Weightless In Water CD is a classic album of the genre.

Leftover Salmon
Polyethnic, Cajun Slamgrass was the name of the game. Leftover Salmon, along with String Cheese Incident, embodied the thriving Colorado music scene of that age - soon to be joined by Yonder Mountain String Band. The draw was strong. Many of my favorite live music experiences from the mid-90's to early 2000's were at Leftover Salmon shows. They brought the party, but it also stimulated the bluegrass jones. With Vince Herman, Drew Emitt and Mark Vann (banjo) you had three strong showmen who delivered - in unexpected ways - every single time.

Dark Star Orchestra
I was pretty up on my Grateful Dead trivia back then, so going to see a band that recreated entire concerts song for song was quite appealing. It didn't really feel like just a cover band. With John Kadlecik at the controls it felt like a real thing. People, including me, used to actually trade DSO tapes (or burned CDs). As someone who only got to see the Grateful Dead a few times in '94 and '95, it was fun interacting with the true Deadheads in attendance who had lived it. As a student of setlists and characteristics of different playing styles ('73 vs '77 vs early '80's vs late '80's) it was usually possible to guess the correct year by the 3rd of 4th song. That was part of the fun too.

String Cheese Incident
These guys were a big deal to me back then. And when I look back now I realize how unique SCI was and continues to be. Sure they adopted a Phish-like marketing/touring aesthetic but (in spite or or as part of that) they chose a cover repertoire that was untouched at the time. Shows could include covers of Lonesome Fiddle Blues (Vassar Clements), Lands End (Tim O'brien), Mauna Bowa (Jean Luc Ponty), Birdland (Mahavishnu Orchestra), Blackberry Blossom (bluegrass standard), All Blues (Miles Davis), Impressions (John Coltrane), and more. And that's just the instrumentals! The originals in SCI's repertoire never carried the weight of say Phish or moe.'s songs, but the islandy bluegrass shades of their originals helped propagate String Cheese's lighthearted hippie hula hoop image. They started playing venues like The Fillmore and Red Rocks while I was living in Colorado.

moe.
I saw moe. a lot from 1996 through 2001 and they crushed it every single time during that stretch. moe. seemed to focus more on originals than their peers. Their songs employed shifting time signatures, quirky lyrics, twin lead guitar, epic jams, and hooky choruses. Between Al, Chuck and Rob you had three songwriters each with their own distinct style. Chuck's being more classic rock leaning, Al's bending toward country and alternative, and Rob toggling between massive anthems and barroom ballads. No Doy holds up as one of the definitive jamband albums, with Headseed and Tin Cans and Car Tires not far behind. moe. songs such as Rebubula, Timmy Tucker, Mexico, Spine of a Dog, Moth, Buster, Recreational Chemistry, Brent Black, Nebraska and Akimbo (the list goes on) are firmly planted and growing up to be redwoods of the forest, or at least spruce.

Sector 9 (Sound Tribe Sector 9, STS9)
When I first started seeing Sector 9 they were simply called Sector 9. The Sound Tribe part hadn't been added yet. Even if the name part was still evolving, Sector 9 the band arrived on the scene fully formed with their own crystal-infused pre-Y2K Mayan mythology giving them an advantage. These guys were no joke and were far removed from the wacky, party vibe of the other jambands. This was before they started using a lot of laptops. No fault in the use of technology, but I liked the organic purity of the pre-computer sound which focused on guitarist Hunter Brown's simple yet fascinating gift for melody, David Phipps' sophisticated piano accents, David Murphy's elemental bass-lines, and Zach Velmer and Jefree Lerner's propelling drums/percussion. Their spirit rubbed off on me.

Yonder Mountain String Band
During the brief two years I lived in Colorado - 1999 to 2001 - YMSB was king for me. And continued to be well into the mid-2000's even after I moved back to VA. There were four, count 'em four, strong songwriters in the band - Jeff Austin, Adam Aijala, Ben Kaufmann, and Dave Johnston. YMSB was a bluegrass lineup of reckless mandolin, flatpicked guitar, standup bass and 5-string banjo. But they were the most aware bluegrass band the world had yet to see that the time, fully aware of not just the bluegrass traditional world of their predecessors, but also of the performance style that had made bands like Phish or The Grateful Dead such huge successes. As Jeff Austin once said, "If we can put out enough energy to sustain a crowd without drums, and show them they can still dance their asses off, well, we've achieved our goal." Leftover Salmon and String Cheese Incident might have dabbled in bluegrass, but Yonder made bluegrass their home base and then branched out from there. Yonder paved the way for artists like Billy Strings.

Phish
Of all the bands on this list, Phish is the only the one that remains a favorite. The favorite. Even as my tastes continue to morph and evolve down different pathways on a 25+ year long daily basis, Phish stays top of mind. I speak of them in the present tense, not the past tense.

Phish seems to have really, really studied music, and their songs have complexities and characteristics that puts them in a league of their own. We're talking Beatles type stuff here and beyond (Classical music, jazz, et cetera). Many different Phish songs seem like they were written to be mini-genres designed to fulfill a specific niche in the human psyche. There are always certain moments in a song - whether written out or composed on the spot - that feel like they are designed to go straight to the heart (or loins, or jugular) and grab you in an emotional way that you didn't think possible.

There's a level of technical precision coupled with group-mind, collective improvisation in Phish that isn't present in any other bands. Phish has the chops, creativity, synchronicity and desire to work in unison as a four-headed beast. No matter how out there Phish's jams get there's always a sense of direction and cohesion to them. Plus, they rehearse like crazy and treat each show - each moment of each show - as if it were the most important one they have ever played.

From the time Page joined the band in 1985 (?), Phish has always been the same four guys. No lineup changes. Beside a few very early recordings, any time you listen to Phish you know you are hearing Trey, Mike, Page and Fishman.  Four distinct instruments - guitar, bass, keyboards and drums. In effect, this is a classic if somewhat minimalist lineup with each of the instruments represented at a virtuoso level, making it very easy to focus on each individual's contribution to the overall sound. And when you're at the Phish show you get to watch one of our era's best visual artists - lighting director Chris Kuroda - at work.


Phish has a charismatic leader in guitarist Trey Anastasio, an incredibly inventive, driven, prolific and motivational musician. Iconic. Having a guy like Trey in the band definitely has inspired the other members to push their skills to that same level, to the point that there are no noticeable weak links among the four members of Phish. In fact, you'd have a hard time finding a band where a drummer has as much of an influence on the outcome of a concert as Jon Fishman does.

A critique that is often made alludes to the fact that Phish can be lacking in the lyrics department. I wholeheartedly disagree. Even if I don't always find meaning in their words, I almost always find ultimate acceptance in a way that is more hard fought and rewarding than things which otherwise may have been more accessible at first glance.

Email ThisBlogThis!Share to TwitterShare to FacebookShare to Pinterest
Be a Fan
Posted by Tanner Llewellyn at 9:52 PM