My fantasy instrument is some type of mallet percussion instrument - like a xylophone, vibraphone or marimba.  Whether being used in the Brazilian Classical/Folk recordings for Ney Rosauro or Uakti; in the jazz of Bobby Hutcherson, Walt Dickerson and many others; in the indigenous music of Guatemala's Marimba Chapinlandia; or in the rock-like settings utilized by Tortoise, Frank Zappa, and more; I just love this melodic yet percussive sound.

I especially like the idea of an electric version of this type of instrument, but considering the costs of a Marimba Lumina, malletKAT, or Xylosynth, I don't think I'll be spending that kind of money on a musical whim any time soon.  A decent quality piano keyboard like the Roland GO:KEYS can be had for $300 or less, so you'd think that someone would have produced an electric synth vibraphone/marimba/xylophone at a similar price point.

Enter Keith McMillen Instruments.  While their $79 K-Board isn't intended to be an electric vibraphone, it comes close to scratching that itch.  In fact, it might be just what I am looking for! 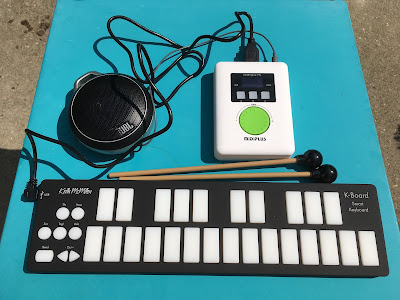 I'm used to playing melodies on an acoustic 4-string tenor banjo, so when I came across the K-Board through an online search last week I wasn't quite sure what technology it was supposed to be.  I assumed an instrument like this would have its own internal sounds, built-in speakers, and power source/battery.  None of that is the case.  After a little bit more digging, I learned of MIDI sound modules like the Midiplus miniEngine  and the MidiTech PianoBox which could provide the necessary power and sounds, as alternatives to a computer or iOS device.

I took a chance and ordered the K-Board, along with the Midiplus MiniEngine Pro and a couple cheap, tiny rubber mallets.  I already own a little speaker that can plug into the headphone jack.  These items arrived yesterday and worked right out of the box!  Here's a sound sample:

Before ordering I thought about the tunes that I like to play and realized that almost all of them contain melodies that live within that 25-key range.  On my GDAE tuned tenor banjo, it is rare for a tune to have a note higher than the high B of the 7th fret of the E string (the 2nd to highest "white key" on the K-Board) and it is fairly unusual for these same tunes to have a note lower than the open D on the D-string (the 2nd to lowest "white key" note on the K-Board).  Basically, my tunes would fit.

I wasn't sure how that MidiPlus MiniEngine pro would sound, but considering that it looked like the exact same same design as the supposedly German made - and twice as expensive - PianoBox, I opted for the cheaper version and it sounds OK to me.

The K-Board is described as being unbreakable - designed to withstand drink spills and being run over by a vehicle - so I figured it could handle being struck by mallets.  The 25 chromatic keys are designed like mini drumpads anyway, so it wouldn't be that unusual to hit them with a mallet or drumstick.

Having now tried playing it with mallets, I'm not sure if that will be my preferred method or if it will be more enjoyable to play with your fingers.  As someone who once took a typing class and can type on a computer keyboard, I like how the layout of the K-Board's keys - while based on the setup of a piano - could ultimately lend itself to a typing influenced approach.

Despite having less than a day's worth of experience with this instrument, I'm thinking that the K-Board will be fun to play.  It will also be a handy thing to have around for working out melodies by ear.  As a left-handed stringed instrument player, the layout of a keyboard like this is very non-intuitive at first, so it's a great brain exercise to realize that higher notes are to the right, if that makes sense.

My hope is that Keith McMillen Instruments does come out with something actually designed to be an electric vibraphone, at a price range well below the few other items currently on the market.  However, at the moment I don't mind pretending that the K-Board is already that instrument.  I probably would be a two mallet player instead of four, and key size and authenticity aren't as important to me as simply being able to play melody lines in a fun and easygoing way.


Email ThisBlogThis!Share to TwitterShare to FacebookShare to Pinterest
Be a Fan
Posted by Tanner Llewellyn at 2:00 PM