What to Read after Bosch? (Other Binge-Worthy Book Series) 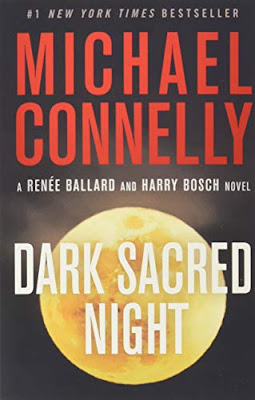 Prior to this year I had never read any of Michael Connelly's novels, but now I have read 6 by this author including 5 Bosch books. Before Connelly I wasn't really in the habit of reading one book after another in a series (now I see the appeal of that) and also before Connelly I didn't make it a habit of reading police procedural style detective mystery novels. Now I guess I do both.

Fortunately there are over 20 Bosch books and from what I gather there really aren't any duds or lulls along the way. Nonetheless, I'm already wondering what else it out there so I have assembled a list below. These descriptions aren't really my words or opinions since I haven't read these books yet, but are composite descriptions based on what others had written.

Roy Grace series by Peter James (Book 1 Dead Simple, 2005)
Set in Brighton, England. Roy Grace is a down-to-earth detective with a strong sense of conviction, and a sense of humor. He was touched by tragedy ten years earlier when his wife disappeared. He still hopes to find her and even keeps some of her things in place in case she resurfaced.


Many characters in the Roy Grace books turn to Grace as a kind of shining light in their time of darkness. He is easy for victims to talk to and trust. Roy Grace will use anything and everything available to him to solve a case. He will use basics like pathology analysis and forensics, to mediums as far off the beaten path as the paranormal, getting input from mediums and clairvoyants about his work. Grace has his own belief system in ghosts and things that go bump in the night, and he brings that into his cases.

Dave Robicheaux series by James Lee Burke (Book 1 The Neon Rain, 1987)
Working within the French Quarter of New Orleans, Detective Dave Robicheaux has seen too much violence for one lifetime. Previously serving in Vietnam he now chases after criminals and lowlifes through the musty streets of his home city. Everything comes to a head when the body of a prostitute is discovered in the bayou, leading him further into the heart of the criminal underworld.

The Neon Rain has a fair degree of violence, something which becomes commonplace as the series progresses. A claustrophobic ambiance lingers over the narrative, with danger and evil lurking around every corner.

Charlie Parker series by John Connolly (Book 1 Every Dead Thing, 1999)
This is a series of supernatural crime thrillers written by Irish author John Connolly. Charlie Parker is a former New York City policeman hunting the killer of his wife and daughter. He would do anything for the vengeance of his family’s death. As a private investigator his cases increasingly push him into the realm of the supernatural.


Jack Reacher series by Lee Child (Book 1 Killing Floor, 1997)
Jack Reacher is a drifter and ex-military policeman. Each book in the series is a self-contained story, and the plot of each book relies very little on the prior books in the series. Tom Cruise played Jack Reacher in a movie. These mystery/adventure books are/were written by British author Lee Child (AKA Jim Grant).

At 6’5", the musclebound Reacher is a larger than life hero whose military and tactical training comes in handy. Reacher kills bad guys through a combination of complex calculations (physics, geometry) and brute strength. Reacher makes up his own rules and shows no restraint, rarely taking any laws into consideration.

Rebus books are usually from Rebus’ point of view, although sometimes this point of view will shift to various characters in the book. Every novel involves some sort of murder, deaths, or disappearances, which Rebus investigates, delving into the dark underbelly of Scotland. Rebus has to deal with a number of internal and external conflicts with his personal life, police superiors, and colleagues.

Part of the series' appeal is the detective’s borderline sympathy for the criminals he associates with, against the backdrop of a shady Edinburgh; a direct dichotomy of the highly clean and commercial city projected to the world.

Elvis Cole and Joe Pike series by Robert Crais (Book 1 The Monkey's Raincoat, 1987)
The Elvis Cole books follow the private investigator and his partner, Joe Pike, as they solve crimes in Los Angeles. Elvis is a tough, conscientious, and somewhat unorthodox investigator.  His hobbies include include cooking, yoga, tai chi, and tae kwon do. He resides with a feral cat in Laurel Canyon above Hollywood. Little is known on Cole’s history prior to becoming a detective. In the first book you learn that he has been partners with Joe Pike for at least 13 years.

Joe Pike is a former Marine and sniper who has seen combat. A man of few words, he has arrow tattoos and is always wearing sunglasses. He is a black belt who enjoys working out and reading.

Kay Scarpetta series by Patricia Cornwell (Book 1 Postmortem, 1990)
When the series begins Dr. Kay Scarpetta is a medical examiner in Richmond, VA, and one of the top forensic pathologists in the country. The plots are notable for their emphasis on forensic science, which influenced TV shows like CSI. Along the way, the series also features FBI profiler Benton Wesley, Kay’s genius niece Lucy Farinelli, and homicide detective, Pete Marino.

Virgil Flowers series by John Sandford (Book 1 Dark of the Moon, 2007)
Virgil Flowers is a thee time divorced, friendly member of the Minnesota Bureau of Criminal Apprehension (BCA), who reports to Lucas Davenport, the protagonist of Sandford's Prey series. Davenport gives Flowers only the toughest cases. But he isn't your typical detective. For one thing, he doesn’t like guns.

Amos Walker series by Loren D. Estleman (Book 1 Motor City Blue, 1980)
Amos Walker is a private detective in Detroit. As a Vietnam vet who boxed in college and served as a military policeman, he is sharp and streetwise but he also has an irreverent side. Amos was fired from the Detroit Police while still in Academy for punching someone out in the shower. In Motor City Blue, set around 1980, Amos is in his thirties.

Walt Longmire series by Craig Johnson (Book 1 The Cold Dish, 2004)
Craig Johnson's Walt Longmire series follows a sheriff in fictional Absaroka County, Wyoming. Longmire solves crime near the Northern Cheyenne Indian Reservation with the help of his longtime friend, Henry Standing Bear. He is a widower whose wife died from cancer. His daughter, Cady, is an attorney in Philadelphia. Longmire catches killers, and he is good at it.


J.P. Beaumont series by J.A. Jance (Book 1 Until Proven Guilty, 1985)
J.A. Jance's mysteries set in Seattle convey a sense of darkness. (she also writes horror fiction.)  The dark underbelly of the city is something homicide detective J.P. Beaumont is well aware of. He is a sympathetic but flawed detective who, as the series progresses, puts his life back together piece by piece while catching violent killers. Over 20 novels in this series so far.

Inspector Vaara series by James Thompson (Book 1 Snow Angels, 2009)
Kari Vaara, police chief in the town of Kittilä, Lapland, debuted in Thompson's first novel, Snow Angels. In the second novel, Lucifer's Tears, he moves to Helsinki. While he is portrayed as a good cop in the first two books, in the next installment, Helsinki White, we see Vaara turning into a rogue and corrupt cop. Helsinki Blood takes on further along the same line, with Vaara trying to tie all loose ends and redeem himself. There are only 4 books in this series since James Thompson died in 2014.

Detective Erlendur series by Arnaldur Indridason (First translated book Jar City, 2000)
The Inspector Erlendur Series is set in Reykjavik, Iceland. Inspector Erlendur Sveinsson is a brilliant cop, but also a gloomy and thoroughly anti-social figure who guards his privacy jealously. When he’s not doggedly pursuing a case, he is hunkered down at home brooding over its details, or reading through his library of papers about people lost in the wilds of Iceland. The childhood loss of his little brother during a snowstorm, for which he blames himself, is still a permanent presence in Erlendur’s life. He also feels guilty over his own indifference towards his children after his marriage failed so many years ago.

Kathleen Mallory series by Carol O'Connell (Book 1 Mallory's Oracle, 1994)
Kathleen Mallory is a Detective Sergeant working in the New York Police Department. She was orphaned as a child and was adopted by a police officer and his wife. Even after years of living as a civilized person, Kathleen has still not forgotten her wild roots. She does not like to get called by any other names except Mallory. She judges things as right or wrong based on intuition and her own sense of justice.

***
Email ThisBlogThis!Share to TwitterShare to FacebookShare to Pinterest
Be a Fan
Posted by Tanner Llewellyn at 6:09 PM