My Ten Favorite Albums of 2019 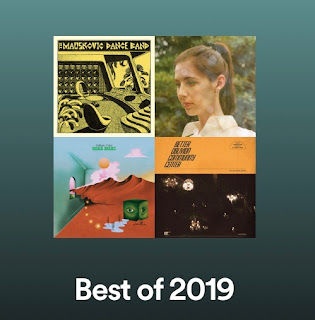 Dennis Young - Primitive Substance
The spirit of Liquid, Liquid lives on in this trippy, percussive, and dance-friendly collection of tracks.

The Natural Yogurt Band - Braille, Slate and Stylus
These funky, hazy, vintage grooves from England should appeal to acid-jazz and trip-hop fans, and those who pay attention to the background music in make-believe wildlife films.

Email ThisBlogThis!Share to TwitterShare to FacebookShare to Pinterest
Be a Fan
Posted by Tanner Llewellyn at 9:50 PM