Big Ears announced its hour-by-hour set/stage times just one day before its COVID-19 related cancellation announcement. In that 24 hour span I had already scanned the schedule and sketched out a rough draft itinerary with some DO NOT MISS sets penciled into the schedule. Here are the five sets I was most looking forward to at the March 2020 Big Ears Festival.

We All Break - Friday 3pm at Old City Performing Arts Center
I don't recall this venue from the previous year. It must be new. This set was at the top of my list because A) I loved the We All Break release when it came out in 2017 and B) I couldn't believe that I was going to get to see this band live. Ches Smith's We All Break project is one of the best examples of the traditional melding with the modern, and this was part of many Haitian themed performances scheduled over the festival weekend. It felt like it might be a once in a lifetime experience. Let's hope it's not a none in a lifetime experience. 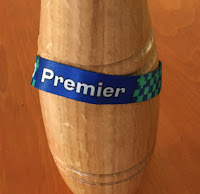 Jake Xerxes Fussell - Friday 10pm at the Jig and Reel
Big Ears isn't strictly for experimental art music. They also have excellent taste for selecting artists dwelling within the Americana or roots music scenes, both obscure and well known. Jake Xerxes Fussell is a prime example. He was a late addition to the festival lineup and I was psyched to see his name pop up. I was going to try and catch him multiple times over the weekend and I had a hunch that he might sit in with some folks like William Tyler or Nathan Bowles, or they might sit in with him. But this 10pm Friday set at the Jig and Reel was my number one slot for Jake. This venue is a tiny little pub so it would have been awesome.

Bang on a Can All-Stars - Saturday 1pm at the Bijou Theater
I prefer the more club or bar-like venues at Big Ears: The Mill and Mine, The Standard, The Pilot Light. But I was still very excited for Bang on a Can at the Bijou Theater at 1pm on a Saturday. I loved the idea of that time slot in this venue. I've been a superfan of Bang on a Can's interpretations of Brian Eno's Music for Airports and Terry Riley's In C for at least 15+ years now. Way back when I think I was originally attracted to the name Bang on a Can All-Stars. With a name like that they had to be good. I actually haven't listened to this band all that much and don't know too much about them or what they had in store for this set, but I was going to be there checking it out.

Xylouris White - Saturday midnight at the Mill and Mine
I was a little disappointed to see that the only set Xylouris White got at Big Ears was going to be at midnight on the Saturday. Or was Big Ears holding back and waiting to reveal some secret sets? Anyway, that late at night was going to be a tough one to stay up for...or in all likelihood stay sober enough for. Note that Bang on a Can was going to be eleven hours earlier - that's a long day! But I was determined to check it out since even before the set times were announced Xylouris White was bolded. Hmmm...here's another example of the traditional meeting the modern. In this case Xylouris White does it with Greek or Cretan music. When the Big Ears initial lineup was first announced last fall I remember scrolling through it, already liking what I was seeing, then letting out a "hell yeah" or something even more exclamatory when I got to the alphabetical end of the list and saw Xylouris White in the lineup. I've been wanting to see these guys ever since Goats came out in 2014.

The Necks - Sunday 3pm at the Bijou Theater
The Necks are a trio from Australia. If I understand correctly, what they do when they perform is basically improvise for the entire set. They don't have "songs" per se. They just get on stage and take the music wherever it needs to go - could be jazz, or ambient, or something like post-rock. I've long heard of these guys and they are another legendary group that I couldn't believe I was going to get to see. When the full set times were announced I noted that this Sunday 3pm slot didn't have any major competition so my attention could be fully devoted to The Necks without any fear of missing other stuff. As news of COVID-19 increased I began to wonder if The Necks were going to be able to make it here from Australia. Of course the answer to that question and many others was answered when the festival was cancelled.

Big Ears 2020 was going to be an incredible festival. I haven't even mentioned performers like Marc Ribot, 75 Dollar Bill, Jeff Parker, Mdou Moctar, Molly Tuttle and Thundercat who were supposed to be there. It's tough when something you've been looking forward to for months on end gets snatched away. The only thing that made it more acceptable is knowing that basically everything else was also being cancelled and that it was the right thing to do, given the circumstances. I hope Big Ears can come back just as strong next time.

Email ThisBlogThis!Share to TwitterShare to FacebookShare to Pinterest
Be a Fan
Posted by Tanner Llewellyn at 3:00 PM