The Search for the Best (Non-Phish) Jamband Album

For fun I thought I'd figure out what was the best non-Phish jamband album. We have to rule out Phish because, ummmm, Story of the Ghost. There's a clue above but first let's walk through the process. To whittle down the list I set a few parameters. Mainly, the album had to come out between the landmark dates of 8/9/95 (Jerry Garcia's passing) and 12/31/99 (Phish's midnight 'til dawn Big Cypress set).

Why these two dates? Sure the jamband scene was already burgeoning before the death of Jerry Garcia, but his passing seem to really ignite a level of creativity that may have been stifled up to then. I mean I can remember before the term jamband was even invented, when you had bands like Solar Circus; basically just very minor league Dead lookalike bands soaking up some of the trickle down from the real thing. With the Grateful Dead off the road their shadow loomed a little less large, allowing bands of a certain ilk to show off their individuality. There may have been some friendly competition involved too. Any halfway good band seemed to get a bump or a promotion after the top, top dog was no longer in charge.

Enter Phish. Phish was already killing it, but they really stepped up their game from '95 onward and set a standard so high that no other band could possibly keep up with, but at the same time this raising of the bar lifted many others up along with them. The new average was way better than the previous average. Things happened fast, super fast, then it peaked and suddenly crashed with the performance Phish gave on 12/31/99. Nothing could ever top that so it was almost like why bother. Of course things continued to grow, but my point is if you hadn't done it by 1999 then you hadn't done it. You can't put out an album in the 1970's and have it be a 60's album. So the same thing holds true here.

OK so who are the contenders?  One obvious choice is Widespread Panic. I never did listen to those guys a whole lot, but the album of theirs that definitely qualifies as classic is Space Wrangler. That's from 1988 though, way too early to enter the contest by the rules I'm making up. Unfortunately I'm not familiar with anything WSP put out between 1995 and 1999 and if I didn't listen to it in real time it would be wrong to try and include it now. So cahoots to them for putting out such an ahead of its time album in the 1980's but no can do.

Next would maybe be The String Cheese Incident. They really grew during this 1995 to 1999 time period and put out a couple notable studio albums - 1996's Born on the Wrong Planet and 1998's Round the Wheel. I listened to both of these a lot back then, but upon a 2020 re-listen they just don't hold up. There's an inconsistency due to some songs being too goofy or just not up to par.

I might consider Ween if I considered Ween to be a jamband, but it's pretty clear they aren't/weren't. Especially not in the 1990's. They turned their noses up at such a thought. Although I do probably consider Ween's 1997 album The Mollusk to be even better than Story of the Ghost. Moving on.

I'm going to also rule out Medeski, Martin and Wood and Yonder Mountain String Band. MMW's Shackman album (1996) is no doubt one the best of that decade, as is their 1998 collaboration with John Scofield called A Go Go, but these are not square in the jamband universe, if you will. These are on the fringe, overlapping more with what they used to call acid jazz than pure jamband music. In YMSB's case, their debut album Elevation came out in 1999 so it's within the time frame, but this particular CD was more bluegrass than jamgrass. Not gonna make it.

It's worth mentioning Minnesota's The Big Wu. They never made it big so you might not have heard of them, but their 1997 album Tracking Buffalo Through the Bathtub was one I used to love. The Big Wu were about as stereotypically jambandy as you could get. Unfortunately that works against them now because while still fun, upon re-listen there's too much of an obvious Grateful Dead influence in there for it be legitimately considered.

Now we're getting to the strong contenders. I consider Sound Tribe Sector 9, or just "Sector 9" as they were known in 1999, to be a strong contender. Go back and listen to their 1999 debut Interplanetary Escape Vehicle. Pretty well formed from the get-go, right? Problem is it's all instrumental. Don't get me wrong. I love instrumental music and nowadays I listen to instrumental music more than music with vocals, but lyrics - even if they are mindless, repetitive, non-sequitur filled lyrics - are so part and parcel to the jamband aesthetic that I can't ultimately keep STS9 in the running. The other problem is their 2nd album Offered Schematics Suggesting Peace from the year 2000 is the one.

Keller Williams is a strong contender, believe it or not. Especially his 1999 album Breathe with The String Cheese Incident as the backing band. I listened to that just the other day in preparation for this and was singing along with songs I hadn't heard or thought about in over a decade. Why not Breathe? Because I already know who the winner is and Breathe falls just shy.

Strangefolk's Weightless In Water has all the characteristics I'm looking for. It came out in 1997. They were a jamband. Not the jammiest of jambands, but a jamband nonetheless. Strangefolk was almost like our scene's version of The Jayhawks if The Jayhawks had been trying to appeal to a Phish audience. The emphasis on lyrics and songs was as crucial to Strangefolk as Robert Hunter's lyrics and Jerry Garcia's singing were to the Grateful Dead. Plus, it didn't sound derivative in Reid Genauer's capable hands. This made Strangefolk stand out in what was quickly becoming a crowded field. Most every song on Weightless in Water is good. There's nothing to bring it down. But I'm not there yet. 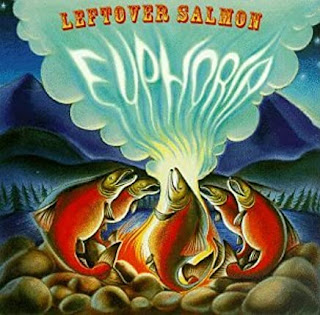 I mustn't forget about Leftover Salmon. However by my own stupid rules I automatically eliminated what might be their defining album, 1993's Bridges To Bert. Without being able to count that one I look to their 1997 release Euphoria.  Guess what. It's even better than I remember it being. Euphoria has the quality mix of Vince and Drew you expect from Leftover Salmon. This team effort aspect should not be discounted. Having two or even three strong singers/songwriters in your band is a big plus. Having all band members come across as equals with no weak links is a big plus. Despite their bluegrass and cajun roots, Leftover Salmon didn't eschew the jamband label either. They embraced it. Euphoria is very well produced as well. Clocking in at under 42 minutes they avoided the CD era's 70+ minute temptations. This means there's absolutely no filler on Euphoria. This would be the winner if not for .moe.

Yes, .moe comes out on top.  And I had two great .moe albums to choose from: No Doy from 1996 or Tin Cans and Car Tires from 1998. (Can I also count the 46+ minute Meat single that was released as part of the promotion of No Doy?). I'm going to go with No Doy for the win.  The influences are perhaps equal parts Phish, Zappa, Camper Van Beethoven, They Might Be Giants and Meat Puppets. Maybe some Uncle Tupelo.  But on No Doy it's really just .moe sounding like .moe. Not two but three strong frontmen? Rob, Al and Chuck. Check. Crazy time signatures, epic anthems, weird modal scales, nonsense lyrics? Check.  .moe wasn't just working from the playbook, they were helping establish it. Any Grateful Dead influence is deeply buried, imperceptible.  That no longer mattered. Instead of building from a tradition like bluegrass or jazz, if anything .moe used alternative rock as its jumping off point. They just took songs that might have otherwise been 4 or 5 minutes and jammed them out for 20+ minutes live. In the studio these were still good songs without those extra minutes being added on. Save that for the live show. If I was also judging by how many times it got played, then No Doy excels on that front as well. If I had to pick just one album that best represents the "genre" for lack of a better word, this would be it. I might listen to No Doy again right now as a matter of fact. 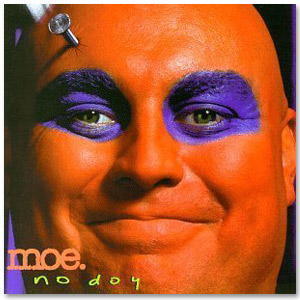 Email ThisBlogThis!Share to TwitterShare to FacebookShare to Pinterest
Be a Fan
Posted by Tanner Llewellyn at 12:36 PM