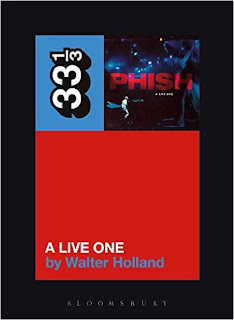 I am happy that there is now a book about Phish in the 33 1/3 series of novella-length essays on music albums.  The album chosen - A Live One - makes sense.  Although Phish does make good studio albums, that type of work would have been too far removed from the improvisatory concert experience that makes Phish Phish.

As their first officially released live recording, 1995's A Live One retains the feel of an album due to its purposeful order of cherry picked selections from various 1994 concerts, but still allows for a jumping off point to discuss Phish as a whole.  For one thing, the band had already moved on by the time A Live One came out the summer after the recordings were made, and would move on again and again before the 90's were over.

Author Walter Holland says that his imagined reader is an interested non-fan who's heard of Phish but knows little of their music, without much experience listening to improvisation.  He also says that he resisted the urge to sell this reader on Phish.  In my view, it's a mistake to believe that the reader needs selling at all.  Such a perception only perpetuates an assumed negative popular/critical opinion that we should be past by now.

I do like the musical terms Holland occasionally employs to describe what is going on during jams, like when he says "in this context A7, as the dominant, leans hard toward the D-minor chord that grounds the whole song".  However, too much of the time is spent on clunky, cluttered writing and unrelated tangents.  There are footnotes for things that don't need footnotes and plenty of things that could use a footnote but don't have one.

On page 8 he says "Maybe A Live One isn't a great album", which he is probably right about.  But then on page 68 he says "Go ahead and put on the A Live One 'Tweezer' if you have it.  If you don't own the album go buy it (it's good)".  I find that to be frustrating.  Holland does make some good observations, such as his explanation of the hose as "anthemic major-chord catharsis after a tension-building passage".  Such matter of fact language is refreshing.

It's hard for me to be too critical of someone who set out to write a Phish 33 1/3 book because that person had to know he was going to be under intense criticism just by doing so.  I admire his effort.  Near the end of the book Holland provides perhaps his best synopsis:


"I like how they've aged.  A Live One has long had a terminal quality, to me - without meaning to, it concisely sets out the terms of a musical close-packing problem that their later explosive--minimalist improv authoritatively solved, and they've never gone back to their early combative style.  Nowadays the borders between their improvisatory episodes are more porous, transitions more gentle, improvisations less inclined to wander aimlessly--beauty is the chief imperative in Phish's late music, and novelty is all but set aside.  There's no didactic or antagonistic point, as there was in (say) the A Live One 'Stash' and 'Tweezer,' which run long and loud and play tricks on the listener partly for the sake of extremity itself; that is, for a laugh".

In my case I was so psyched for there to be a book like this that I pushed on through despite/because of some irritations.  It's a pretty quick read and if anything it might allow you better interpret your own opinions of this band.  Although, don't be surprised if you get to the end wondering if much, if anything, has been said.


Email ThisBlogThis!Share to TwitterShare to FacebookShare to Pinterest
Be a Fan
Posted by Tanner Llewellyn at 9:55 PM