My Little Suede Shoes is a Charlie Parker tune with a Latin flavor and samba groove, although Parker didn't actually write it.  According to Brian Priestly, author of Chasin' the Bird, My Little Suede shoes is a French Caribbean tune called "Mes Souliers De Daim" that Bird picked up in Paris.  Parker explored Latin, Mexican and Caribbean Afro-Cuban rhythms during the early 1950's.  My Little Suede Shoes has an extremely catchy rumba beat that would have fit right in on Guadeloupe or Martinique.


St. Thomas is a tune said to have been "composed" by Sonny Rollins.  His mother was from the island of St. Thomas in the Caribbean and Rollins remembered hearing his mother signing a calypso song when he was a child.  The Rollins composition St. Thomas is based on the song his mother would sing, perhaps originally known as "The Carnival" from the West Indies and/or the song "Fire Down There" from Jamaica.  So, Rollins' version is more of an interpretation of these earlier traditional melodies than a full-on composition.  St. Thomas remains the most popular and well known of Rollins' calypso themed tunes. 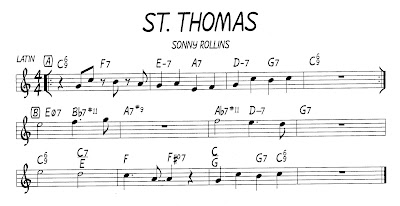 
Email ThisBlogThis!Share to TwitterShare to FacebookShare to Pinterest
Be a Fan
Posted by Tanner Llewellyn at 1:05 PM