Sometimes the smallest shows are the best.  Like the one I saw last night in Baltimore.  137 miles each way just to see a free improv jazz group in a side room of a small indie book and record store.  It was a CD release show for the Tomeka Reid Quartet:  Tomeka Reid - cello, Mary Halvorson - guitar, Tomas Fujiwara - drums, and Jason Roebke - bass.  Part of the Red Room experimental music series at Normals Books and Records.  A $6 cover charge granted front row access to some incredible in-the-moment music making.

Admittedly, my main inspiration for going to this performance was because of the opportunity to finally get to see the New York based guitarist Mary Halvorson play live.  I have been obsessed with Mary's music for the last year or more and she's quickly become one of my favorite musicians.  I can't really describe what she does or how she does it or even why I love it so much, but it really resonates with my ears.

Since my friend and I had driven all the way from central Virginia and got there a little early, the concert organizers basically allowed us to sit wherever we wanted and I chose a seat directly across from where Mary would later be playing.  The green Line Six Delay Pedal was a dead giveaway.  I was literally four feet away from her the whole set with a direct view of her fast moving fingers.  I was slightly concerned that the close proximity would be weird or uncomfortable but I don't think it was. Mary is used to this kind of attention.
But, I digress because although my original intention may have been to see Mary, I was incredibly impressed by cellist Tomeka Reid.  This particular project is her quartet, after all.  In this incarnation she's the leader and composer of most of the material, and Tomeka excelled in this role.  I know there are some other jazz cellists out there but this was my first time seeing the instrument played in that style or at that level.  As an amateur hobbyist tenor banjo player, I definitely take an interest in cello technique due to the commonalities of 5ths tuning and longer scale length that both instruments share.

The music of the Tomeka Reid Quartet was equal parts chamber ensemble, classic jazz and freeform improv.  Every tune reached epic heights and touched on different themes and emotions - from light and airy to hard-hitting and heavy.  Having now listened to the CD they were celebrating, it's clear that they were being quite liberal with their interpretations of these compositions last night, treating them as living, breathing things and not some stagnant dots on a page.  It wasn't quite as free as, say Ornette Coleman free - there was always a foundation there - however, it did frequently branch out into some very intriguing experimentation, with a strong melody at the heart of each piece worth returning to. 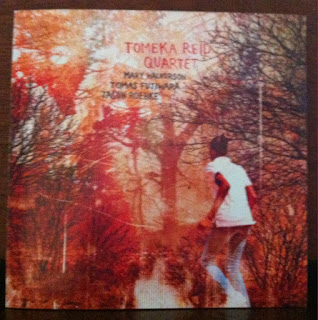 I was already familiar with drummer Tomas Fujiwara through his work with Mary in the excellent Thumbscrew project with bassist Michael Formanek (who I think was in attendance).  Tomas (pronounced TOH-muh) was extraordinarily impressive.  It was obvious that he has tremendous training and discipline and knows his jazz chops and history, but Tomas has also found a way to be unique and be himself in a virtuosic manner.  I felt like I was seeing one of the world's best drummers in action (which I was), along with definitely one of the world's best guitarists and likely one of the best jazz cellists.

I haven't mentioned bassist Jason Roebke yet because his playing was somewhat beguiling.  Tomeka's cello already fills in a bottom end in a way, so Roebke's bass has to plunge deeper to find its place, which he did successfully for the majority of the set.  The only time Roebke lost me was when he went on one of his particularly out there solos which were quite radical even in this setting.  Not being familiar with his playing at all, I wasn't always sure what to make of it.  There was definitely an edginess there that the more I think about it the more I kind of like.  It kept you guessing, that's for sure. 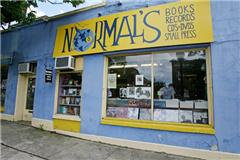 Altogether, this was definitely the experience I was hoping it would be and more.  Driving up and back to Baltimore isn't exactly a casual night out.  We left about 2:30pm and chose to go the scenic route up 301.  An accident a few cars ahead at the crest of the two lane Nice Bridge over the Potomac from VA to MD caused an hour long setback as traffic came to a complete halt on the bridge high above the river and we waited for emergency crews to clear the way.  Then upon entering Baltimore we encountered massive football stadium traffic.  Fortunately the Waze app provided us with an alternate route for the last few hassle-free miles, although it did take us through neighborhoods straight outta The Wire.  Four and a half hours after leaving we were there!

We still had time to eat a huge, tasty meal at the nondescript Caribbean restaurant across the street and then scour the records for a few minutes in Normals.  I got some Satchmo, Duke Ellington and Tiny Grimes LPs, but the best find was Konono No. 1's "Congotronics" album.  That is some crazy music!!!  Lastly, I should mention that Baltimore organist Liz Durrette warmed up the crowd before Tomeka's set with about 20 minutes of solo improvisations filled with blue notes and creepy cartoon-like motifs.  That was pretty cool too.  And home by 2:30am for a full 12-hour adventure!


Email ThisBlogThis!Share to TwitterShare to FacebookShare to Pinterest
Be a Fan
Posted by Tanner Llewellyn at 3:14 PM