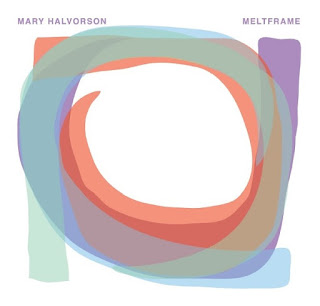 Nothing really prepares you for the opening notes of Mary Halvorson's solo guitar album Meltframe , out September 4th on Firehouse 12 Records. Is a statement being made or is she just having fun?  Or both?  The aggressive, distorted notes challenge the listener to hang on for 4 long minutes.  It's a ride you may or may not want to take again.  That seems to be just fine with Mary.  Easy listening isn't exactly her thing.

Mary Halvorson has appeared on dozens albums over the last decade+, either as band leader, a band member, or special guest.  But, Meltframe is her first completely solo effort and it's been highly anticipated ever since word spread that she was recording it.  Instead of writing music for solo guitar, Mary decided to interpret other people's songs.  Meltframe is an album of covers.

Track 1 is "Cascades" by Oliver Nelson.  I'm not sure if a familiarity with the original recording helps or hinders your appreciation of this take.  I wasn't familiar with Oliver Nelson, or the majority of the songs Mary is doing on this album.  The selections span from the well known masters (Ornette Coleman, Duke Ellington, McCoy Tyner), to more obscure(?) musicians (Roscoe Mitchell, Annette Peacock) and contemporaries (Chris Lightcap, Tomas Fujiwara).

"Cascades" gives way to Annette Peacock's "Blood" and every instinct in my body says Thank You to that. Meltframe's initial jarring movement may shake off all but the most devoted listeners, but when you emerge from that craziness a long stretch of beauty begins to unfold.  Tracks 2 through 6 is my favorite part of the album.  I don't care if these are different songs by different composers.  When taken together it flows like one long suite.

I've been listening to Meltframe a lot over the last week, trying to figure out how it is I feel about it, and I always find myself deep in thought at a certain point somewhere along the way.  Invariably, this is during Track 5, a cover of "Solitude" by Duke Ellington.  It would have been impossible to predict what Mary Halvorson's debut solo effort was going to sound like other than hoping it would achieve moments of brilliance, so it's especially poignant that her treatment of Ellington's "Solitude" - the album's centerpiece - is the place where this brilliance is most apparent.

By track 7 she is back to some distortion and pyrotechnics, although it's more fleeting this time.  When it does show up again you are much more ready for it, even appreciative of it. Track 8 "Platform" comes the closest of any to having groove or swing, before that too is abandoned for more good old fashioned noise.

Meltframe closes out with "Leola" by Roscoe Mitchell.  Any statements that needed to be made have by now been made.  Ultimately, this is simply music that Mary Halvorson wanted to make.  Now it's up to listeners to decide if this is music they wanted to hear.  Knowing Mary's past history, my listening to this album has been more purposeful and patient than if I had come by it accidentally.  By sticking with it I feel slightly altered - in a good way.


Email ThisBlogThis!Share to TwitterShare to FacebookShare to Pinterest
Be a Fan
Posted by Tanner Llewellyn at 10:13 PM