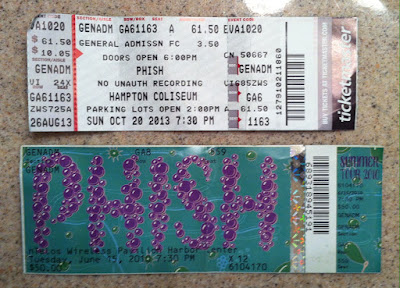 Here are my memories of the 41st through 50th Phish shows I've been to.  For numbers 31 through 40 click here.

2010-06-15 (nTelos Pavilion, Portsmouth, VA)
The nTelos Pavilion in Portsmouth is a fan-friendly venue in an urban setting.  The general admission seating and laissez-fare attitude of the surrounding lot and neighborhood seems to work out.  This was the first of many stupendous shows here.  I especially remember the early 1st set Slave and the Tom Waits song Cold Water.  Most people didn't recognize it but I love the Mule Variations album so this song was a treat to hear, even though it didn't really fit in.

2010-07-01 (Time Warner Cable Music Pavilion at Walnut Creek , Raleigh, NC)
The friends that we met up with at this show brought with them a saying that some weird guy had said the night before...not at a Phish show.  It went "Mike Jordan, he retired".  Which morphed into "Mike Gordon, he retired", which eventually morphed into "Mike Gordon, he retarded".  It was fun to say that as we were walking into the show.  A Llama opener is kind of like getting thrown a curveball.  Roses Are Free and Time Loves A Hero were good to hear.  Divided Sky always pulls me in.  Our group of friends cozied up in the same row during the 2nd set so as not to take up any more space than we were supposed to.  It was all very cordial.

2010-07-02 (Verizon Wireless Amphitheatre - Charlotte, Charlotte, NC)
The saying "Mike Gordon, he retired" was still going strong this next day.  Buried Alive was an awesome opener.  Vultures kicked ass.  What was going down was the best band in the world was playing live music and I was there to hear it!  During the 2nd set we got down pretty close on the Mike side.  Man, I love that song The Lizards.  YEM went over well as a 2nd set ender.

2011-06-18 (Time Warner Cable Music Pavilion at Walnut Creek , Raleigh, NC)
Starting with two instrumentals is unusual.  This show's catchphrase became "Go back to Mexico!".  I think we told that to Curtis Loew.  It doesn't really make any sense.  I'm a sucker for 2nd set Prince Capsians and My Friend My Friends.

2011-06-19 (nTelos Pavilion, Portsmouth, VA)
Hey cool.  We're back at Portsmouth.  Maybe I was becoming one of those jaded vets, but the cynic in me thought the Phish songcatchers overreacted to the Harpua opener.  I was like, "uhmmm...I saw that one in '94".  Also, why they gots to play Alaska?  That 2nd set had the fire though.

2012-08-26 (Verizon Wireless Amphitheatre - Charlotte, Charlotte, NC)
I haven't mentioned this yet but it's kinda my thing to go pee during Moma Dance whenever that song comes up, whether I really have to go or not, but I usually do have to so it all works out.  Especially if it's in the first set.  What you see going on while walking to the toilets while that song is playing is just as entertaining as the music itself.  So, I remember doing that this show, but it's all kind of groggy.  No details whatsoever of the drive there, hanging out, post-show or anything.  I do remember the Alumni Blues > Letter to Jimmy Page, and I remember the Big Black Furry Creature From Mars, and Trey poking fun at Fishman's songs Tube and My Sweet One like he did at the Asheville show a few years earlier.  I think this is the only show from 2012 that I went to.  We skipped the Portsmouth shows.

2013-10-19 (Hampton Coliseum, Hampton, VA)
The Bathtub Gin opener kicked serious ass.  Moma Dance was next - time to pee.  It was nice to hear something new like Steam being played.  The Wingsuit/Fuego songs wouldn't debut until Halloween and we didn't know of their existence yet, so new songs were few and far between at this point and welcomed when they did appear.  Steam is not a bad song.  It kind of reminds of the Stephen King Gunslinger books.  I must apologize to my friends Mike and Vickey for puking all over the hotel room later on in the middle of the night.  (Note to self: don't drink liquor during the show).  They have kids and they're used to my foolishness so they know how to handle that situation.

2013-10-20 (Hampton Coliseum, Hampton, VA)
A greasy, waterside breakfast helped remedy my hangover.  Fresh friends who hadn't been the night before joined our tired old selves for night two of this stand.  Halloween was looming and rumors of what album they would play were swirling around.  Was that a Traffic style jam during Tweezer?  I think I heard some Allman Brothers in there.  That Tweezer got out there.  It rivals the more famous one from Tahoe this same tour.  What was the deal with that Takin' Care of Business?  Ginseng Sullivan and Paul And Silas in the same show?  I was liking it.  This was the Hampton we were used to.

2014-07-29 (nTelos Pavilion, Portsmouth, VA)
Summer 2014.  Laura and I spent a lovely morning in Norfolk enjoying the downtown area, harbor and museums before taking the ferry over to Portsmouth and meeting up with our friends in the infamous unofficial Portsmouth parking lot that we always manage to hang out in pre-show.  Everyone there was cool.  Getting to know some intelligent, funny and obsessed younger fans was a bonus.  Mike Gordon rode through on a golf cart and I shouted a request for Yarmouth Road which he obliged the next night.  I loved, loved, loved this show.  While it was happening I enjoyed it in the moment as much as any show ever.  That's all you can ask for, right...being in the moment?  Every aspect of this show reinforced my love for this band.  We have family in VA Beach so we cabbed it back.  Our cab driver was an old black lady named Rosetta who said she liked "writing poems and playing with water in her backyard".  I quote.  I think she was an angel sent from on high.  Oh wait a second...I'm an atheist.  Nevermind.  Rosetta gave me her card and said to call her the next day when we needed her services again.  Then she took my 40 bucks.

2014-07-30 (nTelos Pavilion, Portsmouth, VA)
Back at it up and early this day.  Another pleasant morning in Norfolk and then we met up with our friends at the Bier Garden in Portsmouth just after lunch time and laughed about how crazy the night before was.  Back to that same parking lot for some more socializing and strange coincidences.  Then, sure enough, it was showtime and this one rocked as well.  I remember being in a really good mood, perpetually.  Nothing too serious or pensive...just goodness.  After the show we wanted to keep hanging out with our friends so we piled in a car and went back with them to their hotel, only to discover that their hotel was only 4 blocks away from where we had been earlier in Norfolk each day before taking the ferry to Portsmouth.  That would have been good to know in advance.  When it was time to leave I called up the cab driver Rosetta from the night before, but instead of her again she dispatched some crazy white dude to give us a ride.  He was all over the road; I think just to see what our reaction would be.  It wasn't a pleasant escort back to the beach like the night before.  Oh well...he got us there, and didn't charge as much!

That's it.  That's all 50 shows.  (Today becomes number 51 by the way).  Sorry I couldn't be more descriptive of the actual music but I'm lucky that I can even remember the dates and locations.  I really should get back to playing banjo now.


Email ThisBlogThis!Share to TwitterShare to FacebookShare to Pinterest
Be a Fan
Posted by Tanner Llewellyn at 9:30 AM