Remembrances of 50 Phish Shows - Numbers 11 through 20 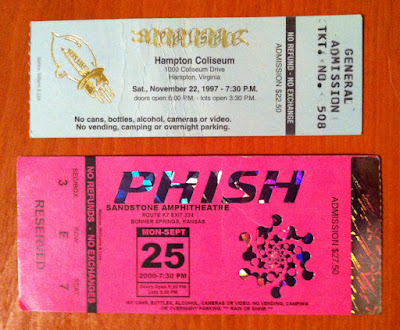 I counted up that I had been to 50 Phish shows from 1994 to 2014.  I'm about to surpass that number but in honor of that nifty milestone I thought I'd jot down the first things that come to mind about each of the 50 Phish shows that I have attended.  Below are shows 11 through 20.  For shows 1 through 10 click here.

1997-11-22 (Hampton Coliseum, Hampton, VA)
I didn't know that they could possibly top the night before but they did.  A Mike's > Hydrogen > Weekapaug for the ages to start the show.  Followed by Hood.  A jammed out Halley's opened the 2nd set, if I remember correctly.  That whole 2nd half had such energy.  Such importance.  The Bouncin' encore was the most beautiful thing I had ever heard or witnessed in my life.  Probably my all around favorite two set show, this one.

1997-12-28 (USAir Arena, Landover, MD)
It's funny how much your mood on a given day can impact your intake of the show.  This was a Sunday and I guess Maryland still had blue laws, meaning no stores sold alcohol on that day.  That was a mild bummer and we had nothing else handy to set it right.  This show never quite jived for me.  I remember the Scent of a Mule being cool, though.  At the time I think I was wishing that I was going on to the next three nights at MSG and didn't appreciate this show for what it was.

1998-08-07 (Walnut Creek Amphitheater, Raleigh, NC)
It rained hard before and/or during the beginning of this show.  Weird, unexplainable memories remain of climbing up (proverbial?) walls during Forbin's, and of falling to pieces during Limb By Limb and landing to reform.  It was a quite literal interpretation of the song.  This show inhabits some weird, surgary pockets of the brain and I'm not sure how it got into those places.  It remains a mystery.  Drove home listening to a Grateful Dead tape with a killer Dark Star on it.

1998-08-08 (Merriweather Post Pavilion, Columbia, MD)
This show had a trippiness coming from the stage.  I don't know what was going on but Phish was playing differently this night.  Not necessarily better, just different.  Double pumping Wedge and NICU to kick things off gave it a Dead-like feel that suited the atmosphere of MPP well.  Sweet Jane was an odd way to end the first set.  Page looked certifiably crazy on the big screen while singing it.  Piper carried that second set on its back.  I've never seen a show that relied so heavily on this song in that placement.  Not all of the crowd was on board or riding this wave.  The Sabotage encore was a complete left turn from the mellow and minimal approach being offered this night.  I don't know how they did it.  Everyone on the lawn jumped about two feet forward the instant that song began.  I felt like a poser because I didn't even recognize Sabotage or know what it was.

1998-08-09 (Virginia Beach Amphitheater, Virginia Beach, VA)
It was a long, traffic-filled drive from Columbia, MD to Virginia Beach and we were tired out when we got to the VA Beach Amphitheater.  Two previous nights of Phish had taken its toll.  There was very little time to hang out in the lot before going into the show.  I think we had decent pavilion seats this night, but never found them, choosing to look for alternative seats, which we eventually had to vacate.  Frustrated, we ended up at the very back of the lawn, which allowed for the first truly relaxing moments of the day.  I didn't instantly recognize the Terrapin Station encore.  I wasn't expecting anything like that.  It was unbelievable and made it all worthwhile.  Afterward, walking back to the car there was complete silence all around.

1998-11-21 (Hampton Coliseum, Hampton, VA)
This show had  what seemed like a very long first set.  Just when you thought they were going to take a break, they would tack on another song, and then another song.  Having seen Sabotage a few months earlier at Merriweather, I was ready for it this time when it opened the 2nd set.  Other than that the 2nd set felt kinda lite, although Ha Ha Ha was fun to hear.  For some reason we didn't go to the night before this one at Hampton.

1999-07-08 (Virginia Beach Amphitheater, Virginia Beach, VA)
I really don't remember much about this show.  Looking at the setlist now, I do remember the Fee jam, and the Meatstick.  The Meatstick dance craze was sweeping the nation that summer.  I definitely didn't pick up on any Days Between jam during BOAF that might have happened.  The Syd Barrett Terrapin must have been a joking nod to the previous year's Terrapin Station encore at the same venue.

1999-07-09 (Merriweather Post Pavilion, Columbia, MD)
I don't have too many vivid memories from this show either, other than knowing that I was really digging it.  The Farmhouse was especially well received by the crowd on the lawn.  I'm sure I was in approval of that What's The Use.  Two Meatsticks in two nights?  That was OK at the time.  The Sweet Emotion quote in Mike's Song was fun.  This was before glowsticks became a nuisance.  The glowsticks went well with the music during the Harry Hood encore on this night.

1999-07-23 (Polaris Amphitheater, Columbus, OH)
Conversely, I have lots of memories of this Polaris show.  My first and only time at this venue.  We drove up the day before.  It was a good 11 hour drive from where we were coming from.  Laura brought along her sister for her 1st and only Phish concert.  A non-fan, but we all had a great time and share lots of fond stories of this trip.  The reason we went to this show was because Columbus, OH was a good meetup place for some friends going to school in Indiana.  We met a guy named Star Man before the show who lived up to his name.  This seemed like the first time that possible drug abuse might be marring Phish's playing.  That Birds of a Feather seemed impacted in this way.  Nonetheless, I enjoyed the whole show immensely.  The Fast Enough For You was especially poignant.  Third Meatstick in a row for me!  There was a big rainstorm during the Rocky Top encore and we all got soaked.

2000-09-25 (Sandstone Amphitheatre, Bonner Springs, KS)
Laura and I moved to Colorado at the end of the summer in 1999 so there was a 14-month gap in seeing Phish during this time.  When they finally did come around we were ready, but we also felt more like grownups than ever before.  It was kind of like a pre-marriage honeymoon.  We stayed at a quaint bed and breakfast in Bonner Springs and went to a winery before the show, which was a newish experience.  I remember drinking this nice Riesling directly out of the bottle and sharing it with a wook in the parking lot, who shared his orange flavored malt liqour back with me.  We were really close this show from the start - like 4th row - closer than the tickets convey.  Hmmmm.  The Beatles song Everybody's Got Something To Hide Except for Me and My Monkey was a nice treat.  It was only the 2nd time they had played it and they haven't played it since.  It got really cold that night - in the 40's - hence the first set Tweezer.

Email ThisBlogThis!Share to TwitterShare to FacebookShare to Pinterest
Be a Fan
Posted by Tanner Llewellyn at 11:25 PM