I have plenty of other tune-learning play-along books and CDs, so I can't believe I waited this long to get the Blue and Orange Irish Session Tunes books by Sheila Garry and Brid Cranitch.  I wish I had gotten these a long time ago because they are among the best compilations I have found designed for the purposes of learning Irish traditional music. 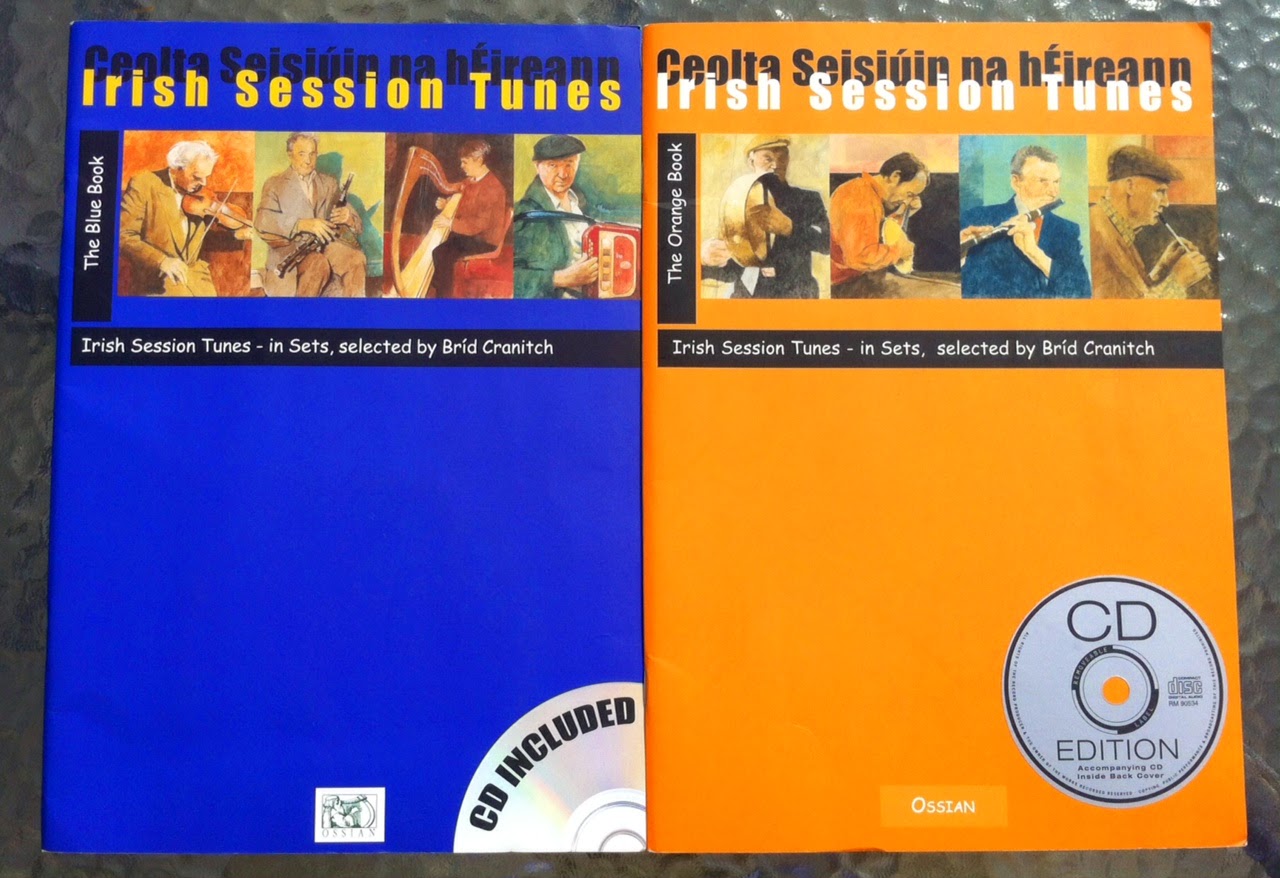 Between the two books there are over 180 tunes: primarily reels and jigs, but a few slides and polkas and one set of hornpipes are included.  Make sure you get the CD editions of the books (or just order the CDs and not the books) because the whole point is to listen to the tunes to get the feel of them.  The music is done by Sheila Garry who plays fiddle in the Clare style; subtly backed by Brid Cranitch on piano.  Sheet music is included in the books but no chords.  A listing of the chords being chosen by Brid on piano would have been a nice addition.

The tunes are only played once through, which is a minor nuisance that allows them to fit more on a "CD" (these were recorded in 2003).  This also means that as you listen to it a lot more tunes will fill your ears than if they were played multiple times through!  Another upside is the tunes are always put together as sets of two or three that flow together with no interruption, so you get an idea of how to smoothly transition from one tune to the next.  (This is a feature often ignored by other collections).  Just because they put certain tunes together as sets doesn't mean you have to keep them together. Once you have enough of these tunes under your belt you can make up your own sets on the fly!

Be wary of the titles of some of the tunes, or at least don't get too hung up on them.  On the Blue CD I noticed that "Dark Girl In Blue" was what we call "Denis Murphy's Slide", and "Kaiser's" was "Going to the Well for Water", and "Clare Jig" was "Mug of Brown Ale" and "Humours of Ballinafad" was "Geese in the Bog".  This is actually kind of cool because it teaches you that it's more about the tunes than the tune titles.  I suggest listening to tunes with unfamiliar titles to see if you recognize the melodies.  This is great ear training.  Sometimes a new tune is only a mild variation of a tune you already know.

Unlike other play-alongs you'll actually want to listen to these recordings over and over.  Sure, it's still scaled back a bit, but it doesn't feel stilted at all.  It feels like real music.  Sheila's fiddling is endearing and Brid's piano accompaniment is quite lovely in its minimalism.  You could randomly pick tunes to learn from these two books and the odds are pretty good that some folks at the session you are going to would be able to play them with you.

Note: The "Red" and "Green" books in this series do not feature Sheila and Brid and are therefore not as good in my opinion.  In the Red book the fiddle is played too fast and in a less pleasant, more flashy, manner.  In the Green book the tunes are played on tin whistle, which may or may not be a good source instrument for learning tunes if you are a strings player.  Start with the Blue and Orange books, and if you need more check out the Red and Green ones.


Email ThisBlogThis!Share to TwitterShare to FacebookShare to Pinterest
Be a Fan
Posted by Tanner Llewellyn at 11:03 AM