In the ongoing search for albums that capture that old time mandolin sound, I came across the Buckhannon Brothers' 1993 CD Little River Stomp.  On that collection of old time mandolin instrumentals, mandolinist Curtis Buckhannon, with his brother Dennis on guitar, run through 25 tunes ranging from rags and Celtic, to Scandinavian and Southwestern, and of course a healthy sampling of tunes from their home state of Missouri.

Rather than sounding like crossover music or a jumping across styles, there's a consistency to the album as Curtis and Dennis impart the modest qualities of the old time folk musician regardless of a tune's origin.  Upon hearing this broad, well chosen selection of melodies I just had to find out more about mandolin player Curtis Buckhannon and learn how and why he draws from these far reaching sources.  So I interviewed him!  Below is a transcript in Curtis' words.  I hope you enjoy reading.
Definition of Old Time

(CB) The type of tunes I play are all pretty much fiddle-based tunes either from different cultures or American based tunes.  Pretty much everything I do has been played on the fiddle.  I like to interpret it on the mandolin.

Any tune's a good tune.  I even do some Tex-Mex things.  There's some neat stuff going on in the Southwest with the tunes.  Cleoffes Ortiz knew so many unusual tunes - stuff I had never heard before.

I've always had a wide taste in music.  All my life I've listened to classical, to jazz, to blues.  More or less (my repertoire) might just be an expression of my likes in music, rather than standard old time music.  It all seems to fit on the mandolin. Then I get my brother playing on it and it's like wow this is fun!

Musical Influences
(CB) My earliest influence is Kenny Hall and the Sweets Mill String Band.  I fell in love with the way he played.  He didn't just play old time music. He did a variety of things.

I've always loved ragtime from the get go.  It's fun to play rags on the mandolin.  The Etcetera Stringband were so scholarly about the music - so knowledgeable about it.  That very first Etcetera Stringand record was one of my best finds ever.  It was a running joke between me and a friend that we have to learn all those tunes on that record and I think we came pretty close to learning all of them.

Blues - I've always liked Martin, Bogan and Armstrong (Carl Martin, Ted Bogan, Howard Armstrong), the black stringband from Tennessee.  Those guys came to St. Louis one time and I was just blown away by them.  They were amazing. 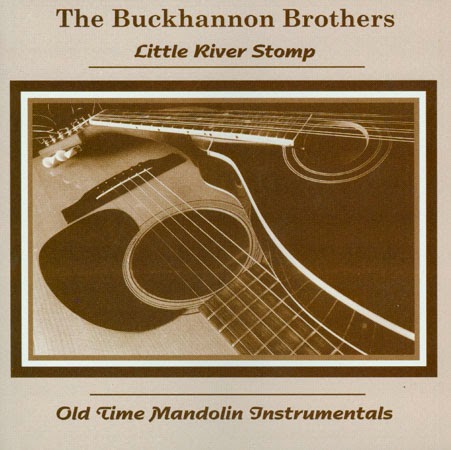 Playing Style and Technique
(CB) I play without a lot of flashiness and just let the instrument try to shine through standard old styles of playing.  The style that I play falls into the category of old time mandolin - I don't know what else you could call it.

Kenny Hall played a lot of open chords and I tend to do that sometimes, but I'll also go up the neck and maybe do some crosspicking things to back up a tune or song.  You've got the option of tremolo.  I do a lot of double stops.  I try to be as creative with it as I can.  I try not to play the same tune the same way every time.

It's not that I'm doing it just to stretch me.  I just do it to keep my interest in the tune and to make it fresh every time.  I might embellish something more one time than I did the last time I played it.  I'm constantly finding things out about music each time I play it. There's always so much to learn.  I like to do a lot of the fun things with the rhythms - getting the syncopation, playing on the off beat.

I don't use my pinky that often - I mostly play with three fingers.  I do use the pinky once in a while, but it's not employed as much as most people use it.  I'm thinking about cutting it off - I don't really need it!

Process of Learning A Tune
(CB) I feel like if a tune strikes me as memorable then it has some quality of staying power, if not at least with me then maybe others.  So, when I hear a tune I become fond of I'll stew it over in my mind a few days or weeks and then try to figure it out.  And lo and behold it seems that the groundwork done in my head is sufficient for me to work it out.  I'll get on the mandolin and 9 times out of 10 the fingering just comes right to mind.  That's how I learn tunes usually.

If a tune really sticks with me it'll be going around in my head and I'll be whistling it to myself.  I have a friend who plays fife and drum music.  His mother plays fiddle and he plays fife. They have a tune Hell on the Wabash.  It's like a march.  A hypnotic modal tune. I just had to work it out.  It fell right into place and has become one of my favorites here lately.

If you've been playing long enough it'll come to you easier.  The more you play the more similarities there are in a lot of tunes....in the positions and nuances. 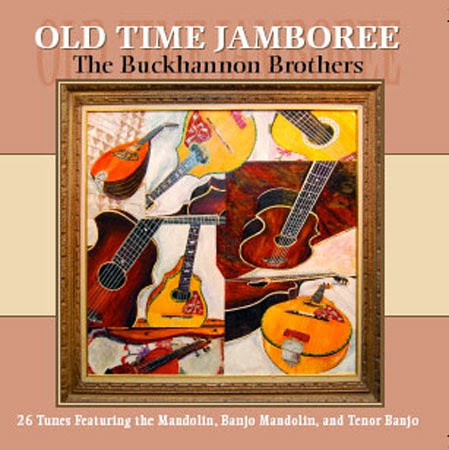 Playing with his Brother, guitarist Dennis Buckhannon
(CB) When Dennis and I are working on tunes I'll come to him with a tune I've learned and he'll figure out the chords from me just playing it.  He ends up coming up with some brilliant stuff and 6 out of 10 times he hasn't heard the recording or who I learned it from and he'll just get right onto it.

Dennis accents me.  Without him I wouldn't be half as good as some people like to say.  I can play somewhere without him and it doesn't sound near as good.  He knows where to put everything - note wise, chord wise and rhythm.

He's a year older.  Growing up we played together all the time, and then we just discovered old time thanks to County records.  They were putting out a lot of good stuff.  My dad had a collection of old bluegrass records.  We've always had some rural roots in our family and it just felt like the kind of music we should be playing anyway.  It just seemed natural.  It seemed to fit.

When I first met the Etcetera Stringband they were playing downtown at the old Lafayette Park Bandstand where Sousa played one time.   I played some of their tunes for them.  They read music and were mystified by how we did it by ear.  It's just how we did it.  We didn't have a choice!

Being Self Taught
(CB) I'm self taught.  My brother started playing guitar when he was younger than I and then I started playing guitar.  In the early 70's during summer vacation from high school me and my brother and a friend went on a trip to the Smoky Mountains.  We went to this little amphitheater concert and there was a guy there playing mandolin - doing fiddle tunes on it and it just enthralled me.  I asked for a mandolin for my birthday that fall and ended up getting one.  Been playing it ever since.  That would have been 1973.

I still like to play guitar. I like the old finger picking stuff - just noodling around on it. I listen to more guitar music than mandolin music.  I stumbled upon Mike Dowling - he plays Delta style guitar and has a record called Bottomlands. I could listen to that 24 hours a day.  I never get tired of listening to it.  I love the old blues players like Lightning Hopkins, Mississippi John Hurt, Fred McDowell.  I love classical guitar, Django Reinhardt.  I could listen to him forever too.

It seems like I'm always finding out something different about music every time I sit down to play.  With that in mind it could be encouraging or discouraging.  I'll never know everything I want to know about music, but I like to think that it's encouraging.

Curtis Buckhannon is available for lessons to those in the St. Louis area. To learn more about the Buckhannon Brothers, visit thebuckhannonbrothers.com or write to P.O. Box 6165, St. Charles, MO  63302-6165.  Their CDs are also available from County Sales.

Email ThisBlogThis!Share to TwitterShare to FacebookShare to Pinterest
Be a Fan
Posted by Tanner Llewellyn at 8:41 AM