Why Money Jungle Might Be My Favorite Jazz Album


Money Jungle might be my favorite jazz album.  Here's why:

Time Period
It seems like a favorite jazz album should be from a certain time period where jazz was at its height developmentally and creatively.  That period is probably between the mid-50's and the mid to late 1960's.  Any earlier than that and it's either naive or chaotic.  Any time after 1967 or 1968 it just feels late to the party.  Money Jungle is from 1962.

Recorded In One Day
Like a lot of great jazz sessions, Money Jungle was recorded in one day.  Three individual jazz giants - Duke Ellington, piano, Charles Mingus, bass, and Max Roach drums - got together on September 17, 1962 in New York's Sound Makers Studio to make music.  It captures the music made in that moment.  Warts and all.  There's nothing polished about it other than the skill and life experiences each participant brought with them that day.

Tension and Aggression
Money Jungle is synonymous with tense, aggressive playing.  This notoriety work's in the album's favor.  It's not often you hear musicians playing this way.  These guys are definitely not always agreeing but somehow making discord sound very appealing. Sometimes it's a mess.  Sometimes it doesn't click.  Those become attributes.  There's a good amount of space between this tension though.

The Participants
Duke Ellington would have been 63 years old when this recording was made.  Charles Mingus was 40 and Max Roach was 38 - not exactly newbies but definitely of a different mindset than their elder Mr. Ellington.  In Ellington's outspoken playing on Money Jungle you can hear the whole history of jazz.  Meanwhile, Max Roach's drumming is always right on allowing for Mingus to dance freely.

The Improvisational Style
Often in jazz what passes for group interaction is just a dude waiting for his turn to solo.  However, on Money Jungle the piano, bass and drums improvise collectively.  Collective improvisation is an aspect of early jazz and somewhere along the way it lost out to extended soloing.  Not here.  This is equal parts collective and improvised.  The structure of the song but a sketch, how you get there unknown.  Music for music's sake. 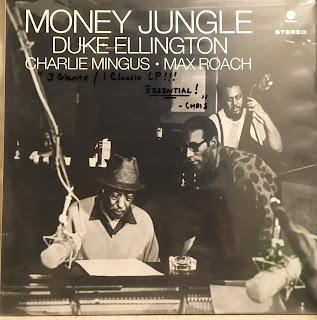 Right Time Right Place
Money Jungle hit me at the right time and right place.  I was ready to claim it as my favorite.  It's an unusual but not unlikely choice.  I'm definitely not an educated jazz listener, or a savvy listener, or even an experienced listener.  It sounds right until proven wrong.  Hey wait a second, what album is this?  Oh right the Duke Ellington and John Coltrane album recorded 9 days after Money Jungle.  My bad.  It's so silky, smoothie smooth.

Email ThisBlogThis!Share to TwitterShare to FacebookShare to Pinterest
Be a Fan
Posted by Tanner Llewellyn at 10:47 PM