50 Tunes in Less Than Nine Months! 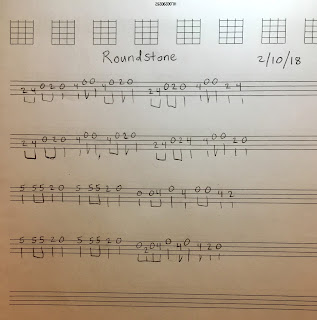 I spent the first few days of February in a state of malaise, with subtle waves of illness making their presence known.  Although I never fully succumbed to whatever malady was horning in, it did stifle my interest in playing music and being creative for a few nights.  Instead of holding a banjo, I just wanted to hold a book and then go to sleep.  Some part of me may have been wanting to delay this process to hold on to the chastity of a project nearing consummation.

More and more, I've been applying words to a melody - a syllable for each musical note to use as a reminder.  I hadn't tried it the other way around - adding a melody to words - but I knew that for one of my last two tunes I wanted to try doing that for a Marosa di Giorgio poem.

The Curtis Mayfield/Impressions song People Get Ready had been stuck in my head recently.  With that in mind, early in the morning on February 8th I opened the Marosa di Giorgio book of poems I Remember Nightfall to page 197 and all of a sudden the words on that page began to sing.  It begins:  All of a sudden, gladioli were born. In a high place, in the North. I know that there are red gladioli, and blue, and black gladioli. Around my house there are only white ones.  I begin to walk toward them.

Just like that I had found the poem I needed for inspiration.  I extracted a few other lines from the poem and in a manner of minutes had arranged these words on a scratch pad and appointed musical notes for each syllable, without concern for scale or theory or form.  I left for work thinking that I would edit later, but by evening the notes I had selected that morning seemed to solidify.  All of a sudden, there were gladioli.

Getting over the complex hump of tune number 49 made me want to make tune number 50 as effortless and lighthearted as possible.  Upon re-listen to Steve Earle's The Mountain, I took notice of the little instrumental track Connemara Breakdown with new ears.  It's sort of a bluegrass/Celtic mandolin tune, with possible similarities to Red Haired Boy.

Yesterday morning I played around with the same general theme and came up with something similar, but different.  To add a little meat to it I referred to some scribbling from the night before based on a melody from Jean Ritchie's Folk Songs of the Southern Appalachians.  It all fit and as simple as that, without overthinking it, I had tune number fifty.

To give this tune a name, I thought back fondly on the tiny Irish village of Roundstone in the Connemara region that I had visited twice over a decade ago.  On one night there in Roundstone I might have set a personal record for most Guinness consumed in one "sitting", but that's another story that I'll have to hash out later.

This Irishy sounding tune provoked Laura to get out her bodhran for the first time in over a year and play along.  A mini Cardinal Puffin reunion of sorts.  I hit record to capture the moment.

What happens now?  I suppose I continue to enjoy the 50 tunes I've written, but also consider it done and start a whole new batch of tunes.  No need to rush though. 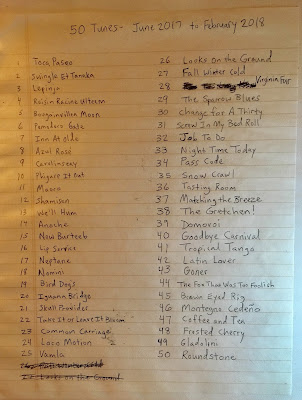 ***
Email ThisBlogThis!Share to TwitterShare to FacebookShare to Pinterest
Be a Fan
Posted by Tanner Llewellyn at 9:22 AM