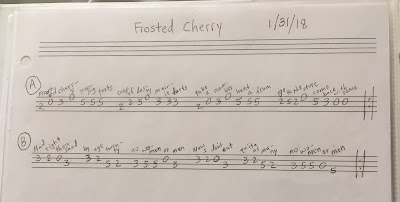 I'm getting close to reaching my goal of writing 50 tunes in a year. Very close. There's 48 now in a span of 8 months.  In January I added 9 new pieces of music.

Goodbye Carnival
If I achieve this goal of writing and playing my own tunes, then a possible negative is giving up the Caribbean melodies I had been playing for enjoyment.  So Goodbye Carnival (and Domovoi from the month prior) is an attempt to carry over elements of those Caribbean tunes into this new format while also leaving them behind.

Tropical Tango
You can see this Caribbean trend continuing in the naming of this tune at least: Tropical Tango.  When I was writing it I wasn't concerned with what key or what scale/mode I was using.  I intentionally didn't analyze it and just let the notes fall and resolve where they wanted to.  I naturally ended up with a very common scale (the Major scale) in an unusual key (F#).  The B-part might have an unintentional Beatles similarity.

Goner
On 12/29/17 Phish played an exceptional version of their song Chalkdust Torture. At about the 16-minute mark Trey goes into a really fetching melody that is reminiscent of Homeward Bound by Simon and Garfunkel.  Those few measures stuck in my head and I found myself playing similar notes on the banjo - the beginnings of a new tune. I kept hearing the words "Gone, just like a train" in the melody. That is of course the title of a Bill Frisell album which I then listened to.  The 2nd track on Gone Just Like A Train is called Verona, and I took part of the Verona melody and did my normal mixture of getting it wrong and further tweaking.  Now I had a B-part and an A-part...another tune!  Meanwhile, during all this process I was also hearing and playing a melody that is similar to a section of The Grateful Dead's Scarlet Begonias. I slapped that on as the 3rd part and voila - a three part tune!

The Fox That Was Too Foolish
My whole point with writing my own repertoire is to have tunes that are uniquely my own, but it's also fun to carry over aspects of my favorite music into this format.  That's what I've done here with The Fox - perhaps too obviously.  This is definitely veering into Scents and Subtle Sounds territory, but it toys with that spirit just enough to veer in and out of it.  As an aside, I've been loving my K-Board recently.  It's such a fun instrument to play!

Brown Eyed Rig
When I first started playing a musical instrument - tenor banjo - back in 2006 one of the first things I instinctively did was try to write an "original" tune called Brown Eyed Jig, based on the melody to Beautiful Brown Eyes.  Eleven years would go by before I tried writing anything else.  A couple weeks back I found that year 2006 tab for Brown Eyed Jig and realized that by combining some portions, changing the key, and changing the rhythm from a jig to more of a rag, then I could have something of interest.  That became the B-part to this new tune called Brown Eyed Rig.  The A-part I added on 1/18/18 was fairly effortless, and a surprisingly good fit if you overlay them.

Montegno Cedeno
My tunes are instrumentals, but I've found that by adding phonetic, top-of-mind lyrics to them I can better remember how they sound.  Basically, each note in the melody equates to a syllable in the words I insert as reminders.  Sometimes now the rhythm of the words comes first.  That happened here with "Montegno Cedeno, the merchanteer", or "Montegno Cedeno, a merchant she".  It doesn't have to mean anything other than the sound it makes.  More syllables/notes followed "Danced for the guard-yun of the Redwood tree" / "Trained with the master of the Wu tai chi".  The B-part - where I heard the words "the soul of the sphere, the soul of the sphere, pumpkin of the patchwork, the giant hunts the deer" - matched up to portions of King Pharoah's Tomb by STS9.

Coffee and Tea
This whole time now I've been wanting to write something in 6/8 time that could be thought of as being jig-like.  That might have happened with Coffee and Tea.  Better yet, I was able to incorporate a minor-key vibe I had been wanting to laud.  I can tell where I got the second half of the tune from, but the first half is cloaked in a mystery that even I can't unpack.

Frosted Cherry
That was going to be it for January, but then Frosted Cherry turned up.  I already had the name Frosted Cherry and was fairly certain that my next tune - to be written in February 2018 - was going to be called that.  However, it got written and completed by January 31st.  It's so diluted that even Trey Anastasio may not be able to find it, but some of the notes in the first part of this tune are lifted directly from the Phish song Horn.  The B-part is lifted from what I believe to be a super obscure track called Margarita by Honore Bienvenu Et Son Orchestre from a record called Zouk Vol. 1. Together they are Frosted Cherry.  To record this example of it, I downloaded an app called SampleTank, randomly found the sound Synth Flute and recorded the first (and second) takes.

I'm at 48 tunes now.  I expect to write the last two this month, and already have ideas for those.  Then I'll have 50 and be done, right? 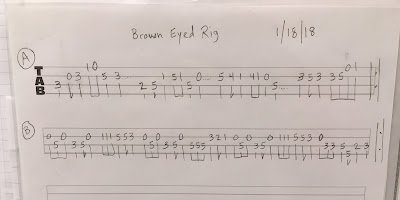 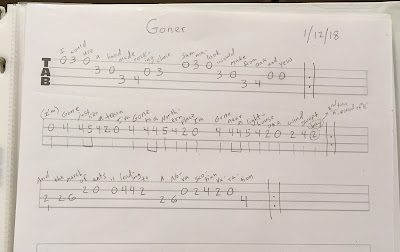 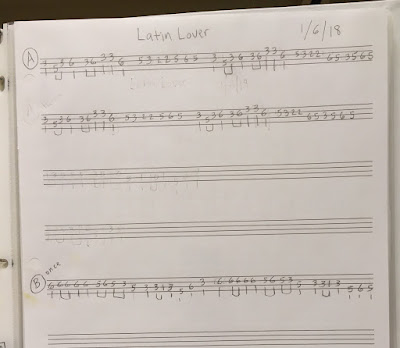 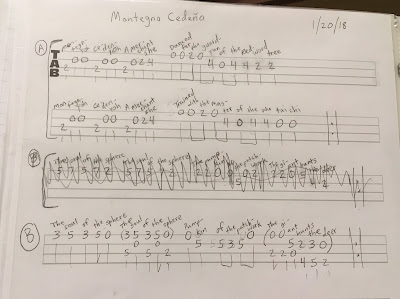 Email ThisBlogThis!Share to TwitterShare to FacebookShare to Pinterest
Be a Fan
Posted by Tanner Llewellyn at 8:47 AM