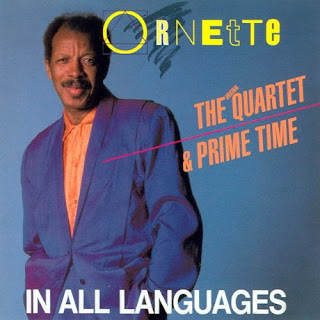 Sadly, most of what I know right now about Ornette Coleman I've learned only in the days since he died on June 11, 2015 at age 85.  I've been really impressed thus far with what I've heard and read in interviews with the forward-thinking jazz musician.  Always thoughtful and well spoken, he often says cool, cryptic things like "sound has no parents" and "let's play the melody, not the background".

A term that Ornette used to describe his musical philosophy is "Harmolodics".  From what I've been able to gather, it's an elusive concept that seems almost impossible to define in words or word sounds.  The following quote is perhaps Coleman's most clear and succinct attempt at describing it:


"Harmolodics is a base of expanding the melody, the harmonic structure, the rhythm, and above all the free improvised structure of a composition beyond what they would be if they were just played as a regular 2-5-1 structure, or if they were played with the concept of a melody having a certain arrangement to know when to start and stop."  (ORNETTE COLEMAN)

To get a better sense, I turned to Joe Morris' book - Perpetual Frontier: The Properties of Free Music. Morris devotes a chapter to Coleman's Harmolodic methodology.  Coincidentally, I had purchased this book just a few weeks prior to Ornette Coleman's passing.

Morris states that Coleman created a platform that was highly rhythmic and allowed for spontaneous melodic invention, but did not rely on notes that related to a specific chord, scale or harmonic line/progression.  His compositions were an open dialog in which the melody, rhythm and harmony were all in play and no one player had the lead.  Coleman's work encouraged an open kind of contribution from his collaborators and therefore he valued musicians with a personal style more than a "schooled" or "correct" one.

Of course, the best way to understand Coleman's music is by simply listening to it.


Email ThisBlogThis!Share to TwitterShare to FacebookShare to Pinterest
Be a Fan
Posted by Tanner Llewellyn at 1:36 PM