Dawes "All Your Favorite Bands" and My Morning Jacket "The Waterfall"

Dawes and My Morning Jacket continue to be two of the best rock bands around right now, both in concert and on record.  My Morning Jacket has held that status for over ten years - at least since 2004's It Still Moves, with Dawes joining those ranks more recently, albeit instantly, circa 2009 with the arrival of their first album North Hills.

Both of these bands have new albums out:  My Morning Jacket's The Waterfall was released May 4, while Dawes' new album All Your Favorite Bands came out today, June 2.  I've had more time to digest The Waterfall and I can say that it might be the best album of My Morning Jacket's career.  Their previous album Circuital was a bit of a dud, in my opinion, causing me to lose some interest in MMJ's trajectory.  But The Waterfall has brought them back.  It's hooky, diverse, soulful and quirky, but not in a way that feels forced. 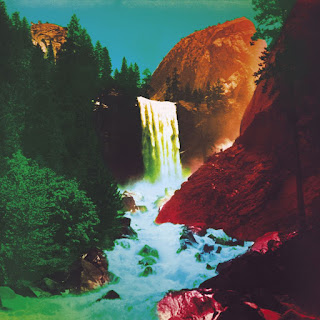 The Waterfall is more compact than some previous MMJ albums, but no less magical.  They manage to express the trippy vibe of Stinson Beach, California (where the album was recorded) with hints of a Kentucky accent that's been lying dormant for a while.  Many different genres are intermingled in a way that manages to not be derivative.  It's safe to say that The Waterfall could be My Morning Jacket's masterpiece, usurping 2006's divine Z for that title.

By contrast, the new Dawes album All Your Favorite Bands is not quite as career-defining.  It does sound A LOT like Dawes though, which is a good thing.  The songs are mostly solid and will help add some variety to their live show, but when you start to look for songs to add to the Dawes "best of" only 3 or maybe 4 songs might make that cut: The catchy title track "All Your Favorite Bands", the rocker "I Can't Think About It Now", the groovy yet radio-friendly "Right On Time" and the album closing ballad, the stunning "Now That It's Too Late, Maria". 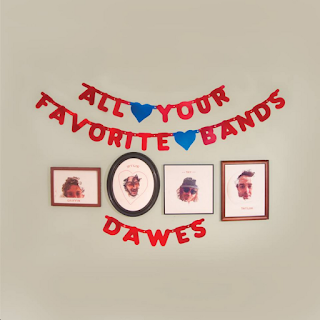 When I heard that David Rawlings had produced the album and that they focused on playing live in the studio, I was expecting/hoping for more of a Jerry Garcia Band type of looseness to be present.  This never really shows up until the last song, the aforementioned "Now That It's Too Late, Maria".  There are some econo-jams, the song "Somewhere Along the Way" comes to mind, but it's not quite as open-ended as one might want.  The same Taylor Goldsmith lyrical stylings are there, the same chorus reliant songs are there, the same solid musicianship.  Does all that sameness stir up the same excitement as previous batches of songs?  Maybe it still needs to grow on me.  Sink in more.  Dawes is like that.  It takes time for their songs to gain identities.  But that fadeout on "Somewhere Along the Way" is not cool.


Email ThisBlogThis!Share to TwitterShare to FacebookShare to Pinterest
Be a Fan
Posted by Tanner Llewellyn at 8:09 PM