The Yanks' Debut Album is a Dandy 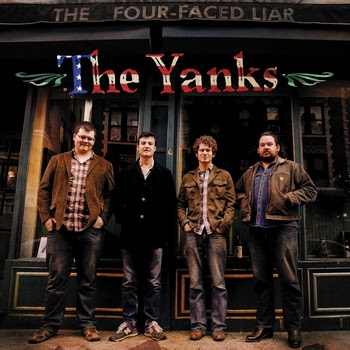 Upon its digital release on March 1st, 2013, the debut album by the brand new Irish traditional music group The Yanks reached the #1 spot on Bandcamp for a day or two.  This is quite an accomplishment for a band that is staunchly old style in its music.

The Yanks are four young Americans (Dan Gurney - accordion, Isaac Alderson - flute and pipes, Dylan Foley - fiddle, and Sean Earnest - guitar and bouzouki) who learned to play Irish traditional music through years of attending sessions and being around older musicians who played the music the way it used to be done.  The album was recorded as purely as possible, with no overdubbing or other artificial sweeteners.  The four musicians set up in a small studio in the Catskills, sat in a circle, and played…session style.

The members of big name Irish music groups like Solas or Lunasa may have one way they play on stage for the benefit of an audience, then, presumably, another more informal way of playing when they have a few tunes with friends and/or play for their own enjoyment.  The appealing thing about The Yanks is they exhibit this rough-hewn, “playing for the sake of playing” attitude at all times, whether on this recording or on the stage, giving listeners the opportunity to experience the music in a more natural form.
As with all Irish traditional music recordings, it’s not really about the specific tunes – whether they are common or obscure – as these melodies are but means for expression.  Conduits toward the groove, if you will.  The iconic Irish fiddler Martin Hayes once described what he does as "going to the core of the music and tunes", saying "You go to hear the music, not the musician."  Ultimately, that is what The Yanks are best at.  Getting out of the way and letting the spirit of the music pour through.
Email ThisBlogThis!Share to TwitterShare to FacebookShare to Pinterest
Be a Fan
Posted by Tanner Llewellyn at 8:16 PM