If albums are like yearbook pictures, then The Green Boys self-titled 2010 debut release, an 8 song EP, must be like the middle school photo - a little awkward and unsure of itself, but with lots of potential.  Oh Delia, their sophomore effort released May 2013, finds the band gaining confidence, maturity and experience. 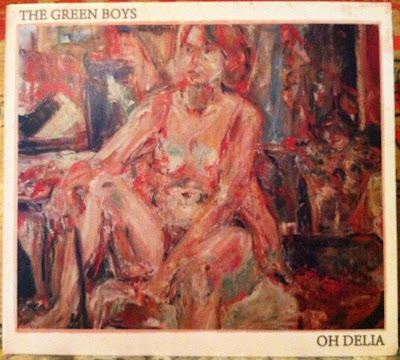 A year in the making, Oh Delia is a solid 12-song production by the “country-revival” quartet featuring the songwriting brothers Ryan and Sean Green, along with Michael Emmons and Zack Miller (becoming a quintet when they add drummer Jonathan Burkett).  Each track on Oh Delia is likable in its own right, with highlights being the opener “It’s Easy (To Die Alone)”, the loping “Summer Song”, the sprightly “Hard Luck Blues”, the instrumental "Black Mountain Promenade", the hook-filled “Fine By Me”, and the deceptively catchy “She’s Out of Your League”.

Although, when I first started listening to Oh Delia it was with an overly critical ear.  With high expectations, I questioned whether there was enough variety across the songs and a cohesive focus to some of the solos.  Then a funny thing happened.  One day, while listening to the album in my car, those concerns went out the window as I found myself happily singing along to the choruses.

I decided to get a 2nd opinion so I took the new Green Boys CD with me when I got together with some friends in Southwest Virginia over this past Memorial Day Weekend.  I wasn’t sure how the slower pace of some of the songs would go over, but at a certain point in the evening I decided to nix the crisp, early 80's Grateful Dead show we were grooving to and put on Oh Delia instead.  It's not unusual for an album to get cut off in-progess among this bunch of skeptical music lovers, but Oh Delia played all the way through, casting a unique spell over all who were listening.
After a brief respite, filled, in part, by a classic Jayhawks album, Oh Delia was spun for the second time that evening in its entirety.  By the end of the night my SW VA cohorts were convinced that they needed to hire The Green Boys to play their annual summer party.  This may not happen due to scheduling, but that’s a better testament to The Green Boys’ appeal than any review of the album that I could come up with.

There are certainly still some things The Green Boys should work on as they continue to hone their art.  Nonetheless, Oh Delia stands a fine document of The Green Boys at this moment in time, or at least how they sounded in 2012 in a studio during the making of it.  I’m certain that the best is yet to come for these Richmond, VA performers.  With a couple more years under their belts, The Green Boys will be ready to have that Senior photo taken.
Email ThisBlogThis!Share to TwitterShare to FacebookShare to Pinterest
Be a Fan
Posted by Tanner Llewellyn at 8:50 PM