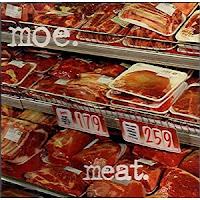 For my 40 minute drive this morning I decided to listen to moe.’s 45 minute “single” Meat (45:09 to be exact), which was distributed as a limited-edition CD in October 1996 to coincide with the release of their No Doy album.  Due to rainy weather and traffic holdups, today’s drive ended up taking a little longer, so I was able to listen to this one-take impromptu studio jam, recorded July 25, 1996 at Sony Studios in New York City, from start to finish.

I happen to have one of the 10,000 official Meat CDs that were issued.  I recall being in a music store named Digits (now long gone) in Richmond’s Carytown district on the day before No Doy was supposed to come out.  I was inquiring to see whether the store expected to receive any copies, when the guy behind the counter handed me the Meat demo CD they had just received and told me I could keep it.  He said I’d have to come back the next day for No Doy.

This must have been October 14, 1996, since No Doy was released on October 15, 1996 – along with Phish’s Billy Breathes and Medeski Martin and Wood’s Shack Man.  A great day in 90’s music history, for my demographic at least.

Meat is almost 100% instrumental.  The only lyric is the one-word chorus of “Meat” shouted a couple times near the beginning of the song.  It has long been one of moe.’s most experimental numbers, often used as a springboard toward freeform improvisation.  On this day they must have had a lot of studio time on their hands, because once they start they don’t stop until three-quarters of an hour later.  Thankfully for us, tape was rolling.

By 1996 moe. was already used to extended improvisations and taking chances on stage, but I think because this version was recorded in a studio (with, apparently, no time constraints) and not in a packed club, there’s no pressure to entertain an audience.  Meat is mixed very well.  You can hear each instrument distinctly and listen to the group interaction in a number of ways.  The twin guitar attack of Al Schnier and Chuck Garvey has always been one of moe.’s defining qualities.  I sometimes have a hard time telling who is who, but on Meat Al is panned to the left and Chuck is panned to the right.  Bassist Rob Derhak and moe.’s drummer at the time, Chris Mazur, are right in the middle.

In an in an egoless fashion, moe. is able to keep this 45 minute piece of improv interesting throughout.  Each musician gets opportunities to lead the jam in different directions, but rarely do two disparate themes seem to do battle.  moe.’s Meat Puppets, Camper Van Beethoven and They Might Be Giants influences are apparent at times, as are elements of surf rock, ska and spy-movie soundtracks.

I’ve listened to Meat many times over the years, and I rarely get bored with it.  As soon as one idea is exhausted another one takes its place.  The fact that it ends after 45 minutes seems arbitrary, not due to a lack of further inspiration, but possibly because some record company exec entered the studio and they felt self-conscious about their indulgence. 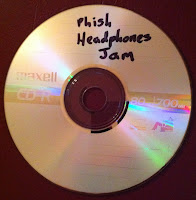 On the ride home I decided to counter Meat with a listen to Phish’s Headphones Jam, their 47-minute excursion from the 2004 Undermind sessions, mixed on the fly by producer Tchad Blake at The Barn in Vermont.  I had to drive a little slower this time so I could make the ride last the length of the track.

Where Meat can sound hyper and spazmatic, Headphones Jam comes across as patient, nuanced and learned.  The dark to Meat's light.  There’s a constant, driving, forward motion in the music as it slowly builds, then quickly recedes into nothingness.  There is no original composition at the core and yet it does feel as if it is being composed, or rather constructed, on the spot as layer after layer is added.

The Headphones Jam never sounds aimless.  There is always a destination in sight, even if it is just out of reach.  Genres aren’t as easy to name check in this case.  Sure, there’s elements of ambience, funk and psychedelia, possibly some blues early on, but often what is being created feels like advanced-level  shit – as if aliens have landed and are introducing us to their highly cultured forms of music.

Phish’s Headphones Jam is the work of four soloists on four unique instruments, and yet there are absolutely no guitar solos, or any other kinds of solos (in the general rock n’ roll sense) to be found on this recording.  Piano, drums, guitar, bass - perfectly in sync, meshing as one, never stepping on any toes, overlapping only in complimentary ways.

2004 Phish may have been buckling under the continual pressure to provide mind-blowing live concert experiences for its huge fanbase, but this recording proves that they were still capable of charming the cobra any time they wanted to.  The Headphones Jam is simply what Phish happened to sound like on this day in their lives – not like yesterday and not like tomorrow.  The culmination of all of their work and learning thus far.

Conclusion
In the shadow of its primary competitor moe.’s 45 minute Meat from 1996 sounds like a charming dalliance…a young band having fun in the studio, testing the limits of their abilities.  It remains very enjoyable to this day.  While Trey, Mike, Page and Fish - 8 years later as a 21 year old band of seasoned masters - hatched something essential, necessary, and vital with the Headphones Jam.

Email ThisBlogThis!Share to TwitterShare to FacebookShare to Pinterest
Be a Fan
Posted by Tanner Llewellyn at 8:28 PM