This will be a busy Friday and Saturday!  On the evening of Friday June 14th I’ll be sitting in with some friends in the band Scalaheen to play Irish tunes as part of the Petersburg Area Art League’s monthly Friday for the Arts series.  That should be both fun and challenging.  Some of those same friends and I, plus a few more, will be at Midnight Brewery the very next day, Saturday June 15th from 2-5pm, to “perform” in an open jam under the name The Accidental Purists.  (This is in addition to the regularly scheduled Ashland Jam from 10am-1pm at Ashland Coffee and Tea, which I will also attend).

This will be my 4th time hosting a session at Midnight Brewery.  I’m fortunate to have gotten to know several oldtime, Irish, folk and bluegrass musicians in the Richmond/Ashland/Petersburg area over the last few years, so whenever I am asked to assemble an informal group to play at Midnight Brewery I try and invite some of my favorite people to play with – all of whom happen to be better musicians than myself!  On tap this time we expect to have…

Kathleen Stover Whittle – A classically trained musician and teacher, Kathy is now diving head first into Celtic music.  She plays Irish flute and tin whistle in Scalaheen and co-hosts the Hiram Haines Irish Session every 2nd Saturday in Petersburg.
Lee Owens is one of the regulars at our Ashland Jam.  A long-time guitar player, Lee might not know the names of many tunes but he can sure pick them up!  You can count on Lee to keep a steady rhythm, but he will sometimes surprise you with his flatpicking skills.
Harlan Williams - mandolin, guitar, fiddle, vocals.  Harlan is one of my favorite people to play music with.  His enthusiasm is infectious.  When I had gotten frustrated and gave up playing in 2010, Harlan was the one who motivated me to take it up again.  Harlan hosts a monthly oldtime jam at Rockwood Nature Center.
Stephen Rockenbach - 5-string banjo, bouzouki, vocals.  Stephen is a former professional honky-tonk musician now enjoying a career in academia.  A versatile performer, whenever Stephen takes part in a jam it is going to run more smoothly, have a higher quality, and most important, be more fun!  Maybe Stephen will sing a couple for us.
John Ely – guitar.  John is another guitarist that I have gotten to know through the Ashland Jam.  John is always one of the first to arrive and one of the last to leave.  I admire John’s adaptability and willingness to take on various types of tunes and songs.  I’m looking forward to having him with us at Midnight.
Ken Hall – bodhran, bones and song.  Ken is a drummer extraordinaire, who honed his skills through years of playing along with Dervish and De Dannan recordings, before finally moving to an area where he could participate in sessions.  We are fortunate to have an open-minded bodhran player of his skill level joining us.  Ken seems to have a never ending repertoire of fantastic pub songs that he sings very well!  Ken also performs in the band Scalaheen.
Margaret Graham – fiddle.  Margaret is one of those teenage phenoms that either makes you want to hang up your instrument forever, or practice like crazy so you can try and keep up with her.  The scary thing is she keeps getting better each time I hear her play.  Hopefully Margaret will take pity on us mere mortals who can’t always play at Liz Carroll and Ricky Skaggs speed!  Margaret also fiddles in Scalaheen.
Laura Fields - bodhran, baritone ukulele.  My wife Laura holds the rare distinction of being one of the only bodhran players to whom people say “could you please play louder?”.  Like me, Laura took up playing music recently as an adult and can sympathize with what a struggle it can be at times, albeit a rewarding one.  In addition to bodhran, Laura likes to play baritone ukulele on oldtime tunes, and, unlike me, started learning to play by ear from the start, so she is well on her way to being a very competent player after less than a year in the saddle.
Paul Willson – guitar.  Paul is a singer-songwriter and accomplished musician with a jazz background who I have gotten to know a little bit through the Rosie Connolly’s Irish session.  He is also damn good at traditional music.  Having Paul will add another element of professionalism to our very talented, Accidental ensemble.
Finally, down as a “maybe” I have Andy Cleveland on fiddle.  Andy joined us last time at Midnight and instantly lifted the music to a higher-level.  A member of the band Handsome Molly, Andy is one of the best all-around musicians I have ever played with, and I feel like we all take a leap forward when he's around.  Andy’s playing is a reflection of his equally witty, snarky personality.  I hope Andy can be there if he’s not busy doing chores.  Who knows, we might even have a few other special guests as well.
What a great way to spend a Saturday afternoon…enjoying excellent craft beer and pleasant music on the day before Father’s Day! 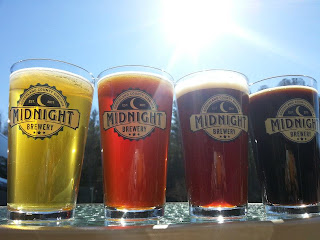 Let these fine players take care of the tunes as you taste a pint or two of that awesome Midnight beer!

Email ThisBlogThis!Share to TwitterShare to FacebookShare to Pinterest
Be a Fan
Posted by Tanner Llewellyn at 7:27 PM