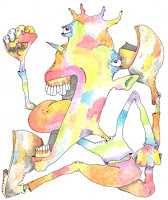 Within the traditional music world it’s easy to become highly-specialized.  Some folks go to great lengths to be true to (insert fiddler’s name here) version of a particular tune, and work diligently on getting their playing style as pure to the source recording as possible, ensuring that it has all the right characteristics and influences.

I don't see it that way though.  For starters, I'm approaching the tradition from the outside, so I'm primarily exposed to new tunes in the jam or session setting.  Plus I'm playing an instrument - the tenor banjo - for which there aren't many examples of, especially on American fiddle tunes.  Therefore I tend to use the local musicians that I play these tunes with as the sources and try and make my individual versions comply with their settings. 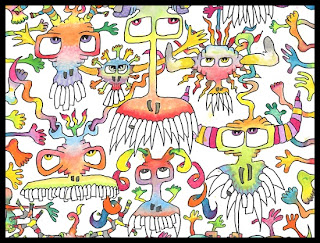 Although I certainly don’t mind listening to individuals and bands who are good enough to make albums, give performances and be considered at the top of their game, I’d just as soon listen to amateurs who play this music for a hobby, as I do.  I can often relate to these more human takes on the tunes in a way that I don’t get from the playing of people who have gotten too advanced.  There's a joy to be found by bringing these tunes to life in a more simplistic, easy going manner.

I suppose in a perfect world my source recordings would be what a combination of Jerry Garcia, Norman Blake, Curt Kirkwood and Bill Frisell would sound like if those guys all played GDAE tuned tenor banjo like I do, and I had recordings of them interpreting all the same Irish and oldtime tunes that I need to know to play with others in my area in the same keys as we play them in.  That ain’t gonna happen so I just use my imagination!
Email ThisBlogThis!Share to TwitterShare to FacebookShare to Pinterest
Be a Fan
Posted by Tanner Llewellyn at 7:04 PM