Richmond VA's The Green Boys to Play Ashland on Friday 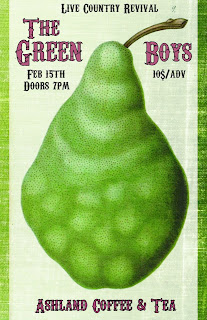 When I describe The Green Boys to folks I find myself comparing them to The Avett Brothers, The Felice Brothers, and Nashville Skyline or Basement Tapes era Dylan.  This isn't exactly accurate though, because although they share some of the song-writing characteristics and charisma of those aforementioned artists, The Green Boys also bring a level of musical chops to the table that is more commonly found in bluegrass bands -- not blue collar Americana groups.

Siblings Sean and Ryan Green share the bulk of the songwriting and vocal duties.  Each has a unique, appealing voice; Ryan with his barrel-aged, aching tenor, while Sean rounds that out with a smooth, soothing tone.  Mandolin maestro Zack Miller channels a rock n' roll energy alongside a strong melodic sense, and multi-instrumentalist Mike Emmons adds subtlety and nuance to The Green Boys' well-written songs.  Mike also possesses a stage banter A-game.

To give you an idea, here's a streamable live recording of The Green Boys from the Purple Fiddle in Thomas, West Virginia from just last week!
The Green Boys have been hard at work on a new album containing a whole slew of new songs to be released some time this spring, and they are ready to perform this material for the AC&T audience.  This will be their 2nd time playing this excellent venue.  Their debut show there last year made a fan out of me, and I expect this upcoming performance to be even better!


Email ThisBlogThis!Share to TwitterShare to FacebookShare to Pinterest
Be a Fan
Posted by Tanner Llewellyn at 8:20 PM