Orkney Folktale: The Giant, The Princess, and Peerie-fool

There were once a king and queen in Rousay who had three daughters. The king died, and the queen was living in a small house with her daughters. They had a cow and a kale yard, but found their kale was disappearing by night. The eldest daughter said she would take a blanket about her and would sit and watch to see what was going away with the kale. So when night came she went out to watch. In a little time a very big giant came into the yard. He began to cut the kale and to throw it into a big creel of straw. So he cut till be had it well filled. 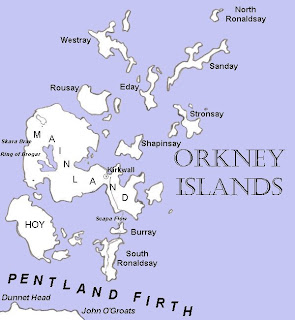 The princess asked him why he was taking her mother's kale.  He said to her, 'if she was not quiet he would take her too'. As soon as he had filled his cubby he took her by a leg and an arm and threw her on the top of the cubby of kale, and away home he went with her. When he got home he told her what work she had to do: she had to milk the cow and put her up to the hill, and then she had to take wool and wash and tease it, and comb and card and spin, and make claith.

When the giant went out she milked the cow and put her to the hill. Then she put on the pot and made porridge to herself. As she was supping it a great many peerie yellow-heided folk came running, crying out to give them some. She said:

'Little for one and less for two,
And never a grain have I for you.'

But when she came to work the wool, none of that work could she do at all.  The giant came home at night and found she had not done her work.  He took her and began at her head and pulled the skin off all down her back and over her feet. Then he threw her on the rafters among the hens.

The next night the second daughter sat out for the giant, and was carried off also. She got the same orders as her sister, but if her sister could do little with the wool, she could do less. When the giant came home at night and found that her work not done he began at the crown of her head and peeled a strip of skin all down her back and over her feet, and threw her on the rafters besides her sister. There she lay and could neither speak nor come down.
The next night the youngest sister said she would take a blanket about her and go to watch what had gone off with her sisters.  Before long in came the giant with his cubby and began to cut the kale.  The third daughter was carried off as her sisters had been, and next morning given the same work to do.
When the giant was gone out she milked the cow and put her to the high hills. Then she put on the pot and made porridge to herself. When the peerie yellow-heided folk came asking for some, she told them to get something to sup with. Some got some rough stems of heather and some got broken earthenware, some got one thing, some got another, and they all got some porridge.

After they were all gone, a peerie yellow-heided boy came in and asked her if she had any work to do - that he could do any work with wool. She said she had plenty, but would never be able to pay him for it.  He said all he was asking for it was that she should tell him his name. She thought that would be easy to do, and gave him the wool. 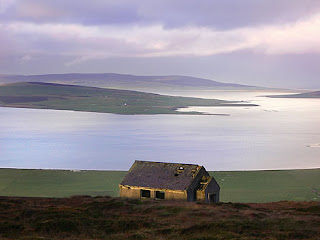 When it was getting dark an old beggar woman came in and asked for lodging.  The princess said she could not giver her that, but asked her if she had any news. But the old woman had none, and went away to lie out. There was a high mound near the place, and the beggar woman lay under it for shelter.  She found it was very warm.  She kept climbing up, and when she came to the top she heard someone inside saying, 'Tease, teasers, tease; card, carders, card; spin, spinners, spin, for Peerie-fool, Peerie-fool is my name.'  There  was a crack in the mound and light coming out. She looked in and saw a great many peerie folks working, and a peerie yellow-heided boy running round them crying out that.

The old woman thought she would get lodging if she brought this news, so back she went and told the princess the whole of it.  The princess kept on saying ' Peerie-fool, Peene-fool' till the yellow-heided boy came with all the wool made into claith. He asked what was his name, and she guessed names and he jumped about and said ' No'. At last she said ' Peerie-fool', and be threw down the claith and ran off very angry.

As the giant was coming home he met a great many peerie yellow-heided folk, some with their eyes hanging on their cheeks and some with their tongues hanging on their breasts. He asked them what was the matter. They told him it was working so hard pulling wool so fine. He said he had a good wife at home, and if she was safe never would he allow her to do any work again. When he came home and found her safe and with a great many webs all ready, he was very kind to her.
Next day when he went out she found her sisters, and took them down from the rafters. She put the skin on their backs again, and she put her eldest sister in a creel and put all the fine things she could find in with her, and grass on top of it all. When the giant came back home she asked him to take the creel to her mother with some grass for the cow.  He was so pleased with her he would do anything for her, and he took it away.

Next day she did the same with her second sister.  She told the giant next morning she would have the last of the food for her mother's cow ready that night, that she was going a bit from home, and would leave it ready for him.  She got into the creel with all the  fine things she could find, and covered herself with grass. He took the creel and carried it to the queen's house. She and her daughters had a big boiler of boiling water ready. They couped it about him when he was under the window, and that was the end of the giant.


Email ThisBlogThis!Share to TwitterShare to FacebookShare to Pinterest
Be a Fan
Posted by Tanner Llewellyn at 11:55 AM