What everyone has been waiting for!  A list of the top ten Irish Tenor Banjo CDs!  At least these are the ones I like the best and/or found out about first. 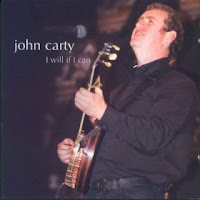 John Carty - I Will If I Can
This 2005 CD features John Carty on tenor banjo and tenor guitar and is probably my favorite tenor banjo album.  Carty is tasteful, mellow and varied...not too notey.  I also love the sound of the bodhran, and Carty is backed up on some tracks by Johnny McDonagh.  Alec Finn (bouzouki) and Brian McGrath (piano) help lift these inspired interpretations of tunes. 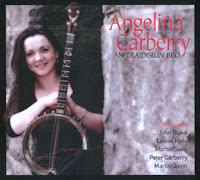 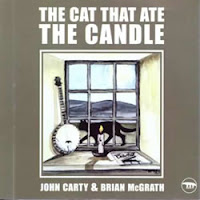 John Carty and Brian McGrath - The Cat That Ate the Candle
This earlier John Carty CD is minimalist trad at its best:  Irish tenor banjo with piano accompaniment.  A nice selection of fairly common tunes and old school playing. 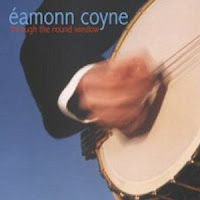 Éamonn Coyne - Through the Round Window
Eamonn Coyne has a more modern style, bringing more influences to the table.  Like all of the albums on this list, this one is mostly instrumental although there are two vocal tracks.  He dusts off some traditional tunes while also venturing into a little jazzy/country territory as well.  Very dynamic. 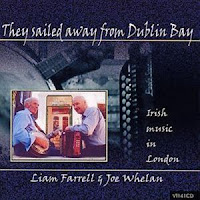 Liam Farrell and Joe Whelan - They Sailed Away from Dublin Bay
When it comes to straight-up Irish tenor banjo / accordion duos, it doesn't get much better than Liam Farrell (banjo) and Joe Whelan (accordion).  This relatively obscure CD is the most recent acquisition to my list, but it's also my current favorite.  I just really like the old style, melodic playing and how the banjo and accordion interact.  Piano and flute add some color to the tunes, but this lively set of tunes is dominated by the chemistry between Farrell and Whelan. 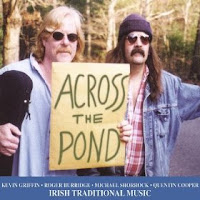 (Kevin Griffin) – Across the Pond
Get this album if you want to hear an ensemble play cheerful, casual session music.  Kevin Griffin's banjo doesn't steal the show, but rather it's part of the ensemble that includes Roger Burridge (fiddle), Quentin Cooper (mandolin, guitar, bass) and Michael Shorrock (bouzouki).  Griffin is from Doolin in West Clare. 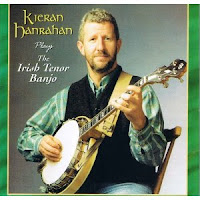 Kieran Hanrahan - Plays the Irish Tenor Banjo
Many consider this CD to be the standard among all other Irish tenor banjo recordings.  Kieran has the uncanny ability of taking something very complex and make it sound effortless and simple.  He's a good one to emulate. 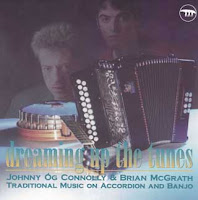 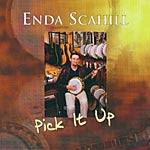 Enda Scahill – Pick It Up
This debut album from the innovative tenor banjoist demonstrates his propensity to play fast and with flair.  Enda has the chops to pull it off.  I recommend combining this CD with a purchase of his Irish Banjo Tutor volume I and II.  There is indispensible knowledge in those tutors, and when listening to this CD you can hear that expertise being implemented "up to speed". 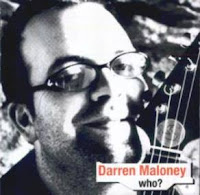 Darren Maloney – Who?
This is the least traditional album on the list. Imagine what Bela Fleck would sound like if he played tenor banjo, and you'd have some idea of where Darren Maloney may be coming from.  Who? contains 15 original compositions by this virtuoso who has obviously put in countless hours of devotion to get this level of creativity and comfort with the style.  Purists sometimes write off things that are too forward-thinking, but this is not a CD to be discounted.

Those are the ten best out of the ones I've heard.  There's a few more I'd like to get, such as the following banjo albums from my wish list:

Seán O'Driscoll and Larry Egan - The Kitchen Recordings
Literally recorded around a kitchen table, this CD is reputed to have a homey, relaxed vibe.  Can't wait to hear it!

Mick O'Connor & Antoin MacGabhann - Doorways and Windowsills
I've checked out some videos of Mick O'Connor playing and I really like what he's doing.  He may not be as well known as some of the others, but he appears to be on par with the best.


Then of course there's Mick Moloney, Gerry O'Connor, Barney McKenna...the list goes on!
Email ThisBlogThis!Share to TwitterShare to FacebookShare to Pinterest
Be a Fan
Posted by Tanner Llewellyn at 9:52 AM