My first exposure to The Stray Birds was at this year’s Clifftop festival.  I chanced upon this young trio while walking by as they were staging an impromptu CD release show in the camping area.  I stopped and listened for about a half hour as a crowd grew around them.  I knew right then that this was a group to watch out for, but I had no idea just how good The Stray Birds really were until I got to see them for a 2nd time this past Sunday afternoon as part of the Village Concerts house concert series in Palmyra.  It was one of the best performances I've seen all year!

The Stray Birds are Oliver Craven – guitar, fiddle, mandolin and vocals; Maya de Vitry – guitar, fiddle, banjo and vocals; and Charlie Muench – upright bass and vocals.  I would describe them as an Americana group that draws inspiration from old-time and folk, while also having a classically-trained aspect to their sound.  They combine original songwriting with traditional songs and tunes in a purposely sparse dynamic evoked by the combination of their 3 acoustic instruments and 3 voices in harmony.

In the weeks since that initial Clifftop encounter I kept The Stray Birds fresh in my mind by frequently watching whatever online video I could find of them playing live.  At the house concert I was smitten by the songs written and sung by Maya de Vitry – including "Birds of the Borderland", "I Dream in Blue", "Railroad Man", "Wildflower Honey", and "Wind and Rain".  This initial batch of songs she has come up with is remarkably good for someone at this early stage in her music making.
The Stray Birds alternated Maya’s tender ballads with Oliver Craven’s slightly more raucous numbers like the instant classic "25 to Life", or the powerful "My Brother’s Hill".  In addition, The Stray Birds built momentum over the course of the show by sprinkling in some crowd pleasing fiddle tunes (both original and traditional) or by showcasing the singing and musical talents of bassist Charlie Muench, who sang lead on a cover of John Hiatt’s "Gone" and also took at least one impressive bowed bass solo.

With regard to instrumental chops no one member of The Stray Birds stood out, rather all 3 of them contributed equally, listening to each other in a way that accentuated each individual's strengths, lifting the overall quality of the music to a height that sets them apart from many of their acoustic peers.  And to think that The Stray Birds have only been an official touring band since the early part of this year; whose debut full-length album just came out this summer! 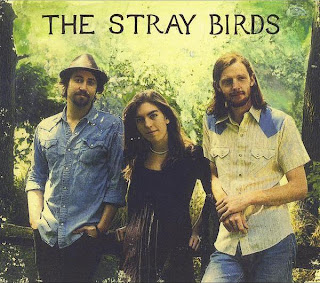 In the intimate setting of a house concert, where attentive listeners hang on a performer's every move, a connection to the audience is key.  This was no problem for The Stray Birds, whose at-ease banter and storytelling had the attendees at the edge of their collective seat, so to speak.  By the way, I picked up a copy of their self-titled debut CD after the show and I’m happy to report that the nuances that make them so appealing in person are apparent on the recording.  However, to really “get” The Stray Birds you must see them live.  Thankfully they have a very aggressive touring schedule so the chances of seeing them soon at a cool venue near you are pretty good.  Check their tour dates here.


Click here to listen to a recording of The Stray Birds at Back Stage Pizza on 9/6/12.

Email ThisBlogThis!Share to TwitterShare to FacebookShare to Pinterest
Be a Fan
Posted by Tanner Llewellyn at 7:06 PM