I lived in Colorado briefly from 1999 to 2001.  Musician Jefferson Hamer had a group there at that time called The Single Malt Band.  I recall seeing them in Boulder on more than one occasion.  I was reacquainted with Jefferson a few years ago in Bristol, TN when The Murphy Beds played at Bristol Rhythm and Roots.  At that time The Murphy Beds included Cleek Schrey and Ryan McGiver. 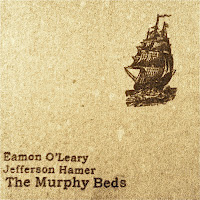 The Murphy Beds are now a duo with Jefferson Hamer (guitar, vocals) and Eamon O’Leary (bouzouki, vocals).  Eamon O’Leary is an accomplished Dublin-born musician who moved to New York City in the early 1990's where he has become an integral member of that city's trad scene.  He's also part of the Swannanoa Celtic Week Staff and is featured on the classic session recording Live At Mona’s.

Eamon and Jefferson got together in the spring of this year to record The Murphy Beds’ self-titled debut album, featuring 10 subdued yet lovely interpretations of Celtic and American traditional songs.  Their blend of acoustic guitar, bouzouki and vocal harmony is electrifying.  I'm finding it to be one of the most listenable albums of 2012.  You can listen to it yourself here:  http://www.murphybedsmusic.com/news

And here’s a video of The Murphy Beds from the WKCR Pink Couch Sessions:

Email ThisBlogThis!Share to TwitterShare to FacebookShare to Pinterest
Be a Fan
Posted by Tanner Llewellyn at 6:30 AM