The Dust Busters are Eli Smith, Walker Shepard, and Craig Judelman.  They are young men, but the music they play is 80 to 100 years old, sometimes more.  American old time:  fiddle tunes, ballads, breakdowns, rags, blues, early country, minstrel songs.  If you lived in the South in the early part of the 20th century and played music for your own enjoyment, as a lot of folks did back then, you probably made music like this.


Using old 78's, field recordings, and commercial recordings from a bygone era as their guide, The Dust Busters tackle these diverse American folk music styles as a string band.  They not only dust off these old tunes and songs, they inhabit them...time-traveling this music forward with as close to the original style as possible still intact.  As a contemporary band with an ardent focus on tradition, The Dust Busters create an opportunity for today's listeners to discover music that they might not have sought out otherwise.

On their new album Old Man Below, released on the prestigious Smithsonian Folkways label, the Dust Busters collaborated with their mentor and elder John Cohen, co-founder of the New Lost City Ramblers.  Back in the 1960's, when this music was not quite as much of a distant memory, The New Lost City Ramblers were the original musical archeologists – approaching folk music from an intellectual standpoint in an attempt to highlight and preserve its stylistic integrity.  The Dust Busters’ own interpretations of this music carries on that legacy. 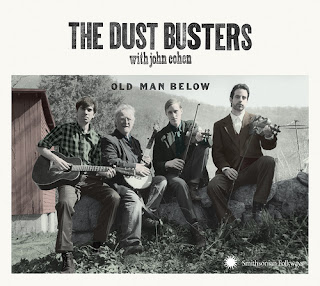 Old Man Below was recorded in accordance with modern day standards of fidelity, but it still has a natural sound:  there is no over-dubbing and no reverb; everything was done live.  The 20 tracks come from a number of different sources, as shown in the track list information below.  The Dust Busters manage to honor the various individual styles of the sources while simultaneously bringing a sense of uniformity to the album as a whole.  All that aside, it’s just plain fun to listen to!  Old Man Below is definitely one of the most refreshing, and, ironically, original releases to come out this year in the world of old-time, folk or Americana music.

Download a pdf of the album's liner notes here.

Email ThisBlogThis!Share to TwitterShare to FacebookShare to Pinterest
Be a Fan
Posted by Tanner Llewellyn at 6:41 PM