The Richmond, VA area seems to be in the midst of its own craft beer revolution.  Credit should probably go to the creative brewers at Hardywood Park for getting the ball rolling last year.  Soon after Hardywood came Goochland County’s Midnight Brewery, who are second to none when it comes to tasty session beers and drinkability.  Starting next week, another brewery will be joining the ranks:  Center of the Universe Brewing Company in Ashland. 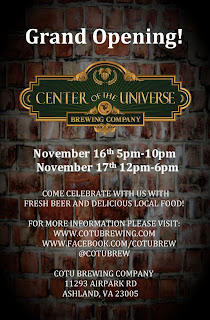 Center of the Universe (COTU) will celebrate its grand opening Friday, November 16th from 5-10pm and Saturday, November 17th from noon-6pm.  There will be music, food, games and of course lots of beer on hand!  You can avoid long lines for beer tickets by purchasing them in advance here:  http://cotubrewing.com/store/grand-opening-beer-tickets

COTU is located on the outskirts of town in the old Herald Progress building at 11293 Air Park Rd, 23005.  There, they have a sizable and welcoming tasting room where visitors will be able to hang out and enjoy pints, thanks to a Virginia law allowing on-site consumption that took effect this summer.  COTU's beer will also be available in some local shops and restaurants.

The brewing company was founded by two brothers – Chris and Phil Ray.  Chris is a major league baseball pitcher, most recently with the Cleveland Indians.  Phil has a background in engineering.  They were home brewing for about four-and-a-half years before deciding to take it to the next level.  Chris and Phil hired Mike Killelea, formerly of Legend Brewing and the current Chairman of the Virginia Craft Brewers Guild, to be head brewer.
The brewery takes its name from Ashland’s self-proclaimed motto of being the Center of the Universe.

I can’t wait to try these!
Email ThisBlogThis!Share to TwitterShare to FacebookShare to Pinterest
Be a Fan
Posted by Tanner Llewellyn at 6:34 PM