We Banjo 3 - Roots of the Banjo Tree (Irish, old-time, bluegrass) 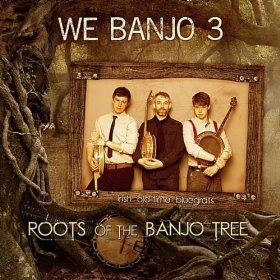 It’s not every day that you encounter references to old-time fiddlers Tommy Jarrell and Ed Haley coming from an Irish tenor banjo player, but that’s exactly what Enda Scahill does in the liner notes to the debut album from WeBanjo 3 entitled Roots of the Banjo Tree, naming Jarrell and Haley as sources, respectively, for the tunes John Brown’s March and Lost Indian.  It’s precisely this Irish-Appalachian connection that drew me to We Banjo 3 in the first place.

As a tenor banjo player, I am of course aware of Enda Scahill, who is easily on any Celtic music enthusiast’s short list of the most technically proficient and tasteful Irish banjo players in the world today.  However, on this particular project Scahill has teamed with the young brothers Martin and David Howley to showcase, among other things, the versatility of the Irish tenor banjo by tackling many tunes and songs that you wouldn’t normally associate with the instrument.

In addition to John Brown’s March and Lost Indian, We Banjo 3 also interprets such old-timey Appalachian/bluegrass numbers as Bill Cheatum, Kitchen Girl, Over the Waterfall, Liberty, Poor Old Liza Jane and Boatman, often as medleys.  Living in Virginia, I hear each of these tunes frequently at the local old-time jams.  So, listening to the We Banjo 3 versions, filtered as they are through the talents of these virtuosic All Ireland Champions, is a definite highlight for me.  I also really enjoy the Irish jigs, reels and airs on the album that fall closer to We Banjo 3’s green shores.  A particular favorite is the barn dance set If We Hadn’t Any Women in the World/The New Irish Barndance, as I feel these two 1920’s tenor banjo-friendly tunes from James Morrison and The Flanagan Brothers really shine under We Banjo 3’s treatment.
It’s not all banjos though.  In fact, only 2 of the 13 tracks feature Enda, Martin and David on banjo exclusively.  Each of these guys are multi-instrumentalists, so there’s a balanced diet of guitar and mandolin on the album as well, plus they enlist the help of several guests who bring in fiddle, double bass, bodhran, female vocals and more to the mix.  The 9 instrumental tracks are tempered with 4 songs sung by David, the younger of the two brothers, who has a very husky singing voice for a person his age.  The album’s production values, song selection and artwork lead me to believe that We Banjo 3 has aspirations of tapping into an American market across the Western ocean.  I can see fans of the Allison Krauss/Robert Plant “Raising Sand” collaboration and/or Chris Thile’s Punch Brothers as potential audiences, for instance. 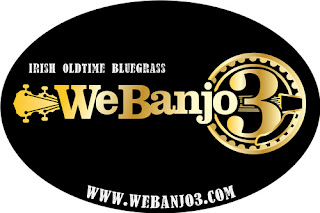 As I start to think of my favorite albums of 2012, a list that is already filled with many fine folk/roots releases, I am making sure that I clear space in the top 10 for We Banjo 3’s Roots of the Banjo Tree!
Email ThisBlogThis!Share to TwitterShare to FacebookShare to Pinterest
Be a Fan
Posted by Tanner Llewellyn at 8:21 AM