For a band that celebrated its 20th anniversary last year, the rate at which Medeski, Martin and Wood continues to generate new, exciting content is quite commendable.  In the last 4 years alone, there’s been the three-album Radiolarians project, which, save for an arrangement of “Satan Your Kingdom Must Come Down”, was all-original newly written material.  Just before Radiolarians was their children’s album Let’s Go Everywhere.  They also found time to record an album of John Zorn compositions entitled Zaebos: Book of Angels, interpreting Zorn's music as if it were their own (highly recommended).  In 2011 Medeski, Martin and Wood celebrated two-decades as a trio by releasing 20 – a batch of 20 new tunes made available digitally throughout the year.  There was also the special limited-release live album The Stone - Issue 4, side projects, an annual summer music camp, and more. 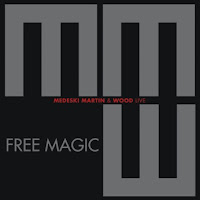 The latest from MMW is Free Magic, a live compilation from their 2007 acoustic tour.  Featuring 5 voluminous tracks spanning 65 minutes, Free Magic covers the gamut of their (acoustic) sound.  From gamelan and South American inspired interludes, to tightly-knit melodies, to free-form improvisations and mind-melding musical conversations, Free Magic is another highlight in a long, extensive career.  I’ve had these tracks on repeat this week and am about to click "play" again now.  I suggest you do the same if you want to hear music free of borders, inhibitions and other limitations.  Free Magic is an apt title for the sounds conjured up by an ensemble in direct contact with the free flowing artistic muse.


Email ThisBlogThis!Share to TwitterShare to FacebookShare to Pinterest
Be a Fan
Posted by Tanner Llewellyn at 7:22 PM