On any given Sunday, fans and players of Appalachian string band and fiddle music know to head down to Cary St. Café in Richmond, VA between the hours of 2 and 5pm for the Old-Time Jam hosted by Tripp and Jenny Johnson.  The jam, which I started attending earlier this year, is celebrating its 9th Anniversary on Sunday, October 7th.  Come by and join the fun as they celebrate 9 years of music and friendship!

The Cary St. jam has exposed me to many mysterious, obscure and crooked old reels with such pictorial and vibrant titles as Snake Hunt, Squirrel Heads and Gravy, and Spider Bit the Baby, played with a high level of proficiency that rings true to the original source recordings.  A few modern old-time tunes may also be sprinkled in, such as Road to Malvern, Sadie at the Backdoor and Waiting for Nancy.  The repertoire is never the same from week to week, which makes it both fun and challenging, and almost everything is played at a deceptively fast clip that will definitely keep you on your toes! 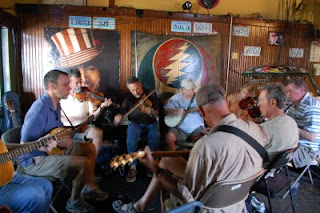 Tripp, who took 1st place in the mandolin competition at this year's Highland County Old-Time Fiddler's Convention, always sits at the head of the circle, propelling the tunes forward with intricate melodies and a strong sense of rhythm.  Jenny sits to his right, adding backup guitar or banjo and singing whenever any of these otherwise instrumental tunes should need a few vocals.  Jenny's not afraid to come up with her own inventive and often hilarious verses to songs like Greasy Coat.

Out of this weekly session has sprung a band called the Cary Street Ramblers, which consists of Tripp on mandolin and vocals, Jenny on guitar, banjo and vocals, plus Jeff Brown (clawhammer banjo), Mike Ford (fiddle), Larry Wiley (fiddle) and Skip Andrews (bass).  This group performs regularly at venues around Richmond, Petersburg and Williamsburg, bringing the old-time music to audiences that may not otherwise be aware of it, and/or who may mistake this older form of music for its more modern relative: bluegrass.
While a different assortment players might come to the jam each week, most, if not all, of the members of the Cary Street Ramblers are there each time, ensuring that the quality of the jamming ensemble always remains high.  In my opinion, there’s no better way to spend a Sunday afternoon than nursing a couple micro-brew pints at this old-time jam, trying to soak up as many of the notes as possible.  With football season now upon us, not all the cheers coming from the bar may be related to the music, but it’s nice to think that they are!
Email ThisBlogThis!Share to TwitterShare to FacebookShare to Pinterest
Be a Fan
Posted by Tanner Llewellyn at 5:27 PM