Old-Time Fiddle Tunes on Tenor Banjo: A New Way to an Old Sound 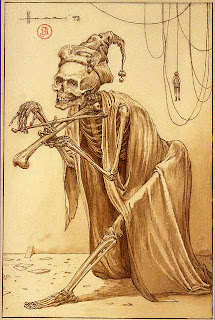 The old-time repertoire primarily consists of Southern fiddle tunes from the late 19th and early 20th century, before recordings and radio.  The two main instruments in old-time are the fiddle and clawhammer banjo, both of which re-tune to suit different modes and keys.

Fiddle and banjo players soak up a lot of what they know just from being around others who play the same instruments in the same way.  Ancillary instruments at old-time jams may include guitar, mandolin, dulcimer and upright bass.

One instrument that you don’t see much in old-time circles is the 4-string tenor banjo, which is what I play.  I don’t re-tune to suit the mode or key, but instead use the GDAE tuning for everything.  Depending on how narrowly you define old-time music, it may be fundamentally impossible to play this music (characterized by open-tuned fiddle and clawhammer banjo) on a 4-string banjo tuned in 5ths.

Frankly, I don't bother too much with semantics and questions of what is or isn't old-time.  It's the repertoire - the simple melodies and sparse structures - and the act of playing these tunes for personal enjoyment and in the company of others that I’m most concerned with. Because there is no history or precedent for tenor banjo, there is no one particular style to emulate, however the process of learning a tune remains basically the same:  you get the bones of the melody from the playing of others and it's up to you to add your own skin.

Email ThisBlogThis!Share to TwitterShare to FacebookShare to Pinterest
Be a Fan
Posted by Tanner Llewellyn at 8:10 PM