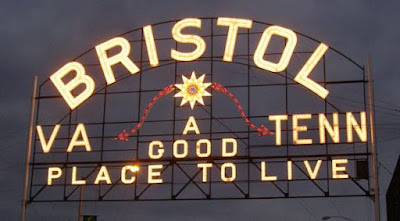 Bristol Rhythm and Roots Reunion is September 16, 17 and 18.  This will be my 7th consecutive year at this music festival in Bristol, TN/VA.

– Ticket costs are low.  $50 for a weekend pass in advance or $60 at gate.  What a deal!
– Three days, twenty stages and over 160 Americana, country, bluegrass, folk and oldtime artists.
– Located in the heart of downtown Bristol, centered around State Street where the VA/TN line literally runs down the middle of the street.  (Remember the Steve Earle lyric, “I shot him in Virginia and he died in Tennessee”?).
– The TN side is heavily saturated with taverns, restaurants, theaters and beer gardens…each one with its own stage.
Here’s a highly subjective guide to some of the performers.  With the large number of stages and vast lineup, it’s impossible to see it all.  I’m fully aware that I am omitting some big names and headliners.  Still, let me know if I neglected to mention anything that I should definitely check out.
Dawes
Saturday, 7:45pm, Piedmont Stage
Sunday, 4:45pm, Paramount Center Stage
I wasn’t really a fan of Dawes until recently but I am currently loving both of their studio releases, especially the newest one Nothing Is Wrong, which has my vote for album of the year.  I’ve never seen them live and this is their first time playing Bristol Rhythm, so I’m especially looking forward to both of their sets.
Zoe Muth and the Lost High Rollers
Saturday, 4:30pm, Paramount Center Stage
Saturday,  6:30pm, CJ & Company
Sunday, 3:15pm, Eatz on Moore
I became aware Zoe Muth a couple years ago after a No Depression review of her debut album caught my eyes and ears.  I’ve been keeping track of her tour dates and I don’t think this Seattle girl has made it out east until now.  Zoe has that classic twangy sound and she’s backed by a solid country band in the Lost High Rollers.

If you can’t make it to Bristol but are in the Richmond, VA area Zoe Muth will also be playing Ashland Coffee and Tea on September 22nd.


Spirit Family Reunion
Saturday, 9:15pm, O'Mainnin's
Sunday, 5:30pm, Dance Tent
This folk/oldtime/indie band was a highlight for me at the spring 2010 Shakori Hills Festival where I caught them doing an afternoon set.  They stirred up quite a dustbowl in the middle of a rainy day at Shakori.  I can only imagine what Spirit Family Reunion will do when they bring their hootenanny to O'Mainnin's on Saturday night!
Danny Barnes
Sunday, 5:15pm, State Street Stage
Wait...what?  Danny Barnes is there?  I didn't see his name listed before but when I was looking over the schedule this morning for this article I saw him in the lineup!. A lot of folks still remember him from his days as the frontman for the punk/bluegrass band the Bad Livers. Since then he has enjoyed a successful solo career.  When legendary jazz guitarist Bill Frisell was looking to learn some Appalachian music he recruited Danny Barnes for lessons and the result was their excellent The Willies album.  Barnes has also collaborated with Yonder Mountain Stringband, moe. and Mike Gordon. He plays kinda late in the afternoon on Sunday but stick around for this one!
Christabel and the Jons
Saturday, 5:30pm, State Line Bar & Grill
Other times, if any, TBA
I always seem to miss Christabel and the Jons at Bristol Rhythm due to logistics, timing or something.  I’ll be at a stage several blocks away and by the time I get to where she is playing it’s either too packed to get in or she is finishing up.  Or she’ll be playing on the Sunday after we are leaving.  I did manage to see her once at Ashland Coffee and Tea so I know that this sexy songstress puts on a good show.  Her band is a welcome late addition to the lineup and hopefully I'll get to see them play this time.

Roan Mt. Hilltoppers
Saturday, 11:30am, Dance Tent
Saturday, 4:00pm, Shanghai Stage
The Roan Mountain Hilltoppers are always fun.  It doesn’t get much more “old time is a good time” than these guys.  Legend has it that they hosted Johnny Rotten and Sid Vicious at their Roan Mountain homestead for a spell back in the 70’s and therefore were an indirect influence on the Sex Pistols.  Good stuff. It's not every day you get to see someone play left-handed, upside down, backwards banjo the way Bill Birchfield does.


High Country All-Stars jam
Friday night, 11:59pm, Piedmont Stage
We’ll be arriving late on Friday after most acts are done playing, but hopefully in time to see this mystery band performing at midnight on the Piedmont Stage.  Hmmm…I wonder who will join in on the jam?  Railroad Earth will have just finished playing on the same stage and Tony Rice, James Leva and Danny Knicely should be around since they are playing earlier that night.  I feel like something special could be in the works.


Other Performers
Favorite Bristol Rhythm acts such as The Hot Seats, Pokey LaFarge, Dr. Dog and The Two Man Gentlemen Band are absent this year, so I’m having to poke around a bit more through the schedule to find new folks to check out.  Often I will make an instant “yay or nay” decision about a band simply by their picture alone, and Cabinet is one I came across that looks like they might be good.  Well, at least I think I see someone with a banjolin in the picture.  Having a banjo uke or banjolin in your band automatically qualifies you as a group I want to see.

Other acts I intend to see over the weekend include Thrift Store Cowboys, Larry Cordle, Possum Creek Playboys, Jason Byrd and Friends, David Wax Museum, Red Stick Ramblers, Bombadil, The .357 String Band, Ian Thomas and Dangermuffin.  Due to arrival time on Friday we may just miss Justin Townes Earle, Railroad Earth and Tony Rice, but I would definitely try and check those out if I were you.
Email ThisBlogThis!Share to TwitterShare to FacebookShare to Pinterest
Be a Fan
Posted by Tanner Llewellyn at 8:57 AM