When Laura and I made our journey to the islands of Orkney, Scotland in 2007 I became aware of the Orcadian writer George Mackay Brown who was born, lived, and died in the picturesque little town of Stromness on the main island of Orkney. Mackay Brown rarely traveled outside his home base, yet he is considered one of the greatest British poets of the last century.  I was further intrigued when I learned that for decades he wrote a weekly column for The Orcadian newspaper.

Stromness can be a pretty sleepy place. Sure, it does have a tourist draw being the seaport that connects summertime ferries laden with visitors in search of the Stonehenge-like stone circles, standing stones and other ancient sites that are dotted around the archipelago.  However its Scandinavian remoteness - over ten miles north of Scotland proper across some rough waters - does limit the amount of people who will visit here.  Despite living practically his whole life in a place where not a whole lot seemed to be going on, George Mackay Brown was never at a loss for content.  These weekly observations, musings and essays were intended to be "light reading for quiet townsfolk on a Thursday afternoon".  I find them to be mystical. 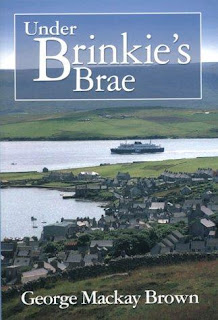 Over twenty years of George Mackay Brown's columns - from the early 1970's to his death in the mid 1990's - have been collected in four volumes entitled Letters from Hamnavoe, Under Brinkie's Brae, The First Wash of Spring, and Rockpools & Daffodils. The books are in successive order with the date each column was originally printed shown.  You can read these in chronological order as a weekly narrative or randomly jump around...picking out pages for a glimpse into his mood on that particular day. Either way you do it, his love for his native Orkney shines through.

I've only read the first two volumes so far - Letters from Hamnavoe and Under Brinkie's Brae - so there's still a lot left to study.  Plus I haven't even begun to dip into Mackay Brown's poetry, novels and other work, although I believe a fair amount of poetry was already on display in his weekly contributions to The Orcadian.
Email ThisBlogThis!Share to TwitterShare to FacebookShare to Pinterest
Be a Fan
Posted by Tanner Llewellyn at 9:59 AM