How I Fell in Love with Irish Trad, Doolin, Ireland 2004

When our flight arrived at the Shannon airport on an early morning in November, 2004 I knew very little about Ireland and certainly nothing about Irish traditional music.  This was my first trip out of the USA, let alone to the Emerald Isle.  I had my car rental set up, B&B vouchers in hand, and had sketched out an itinerary which would have us going to County Clare, County Galway and onwards up into the Connemara region.  I was in search of adventure, Guinness, craic, music, and more Guinness.

By some stroke of luck I had booked our first two nights in the small village of Doolin, probably because of its proximity to the Shannon airport and for its reputation as a good place to hear trad.  After checking in early to our room and having a brief lie-down to catch up on some jet lag, we awoke in the early afternoon to check out our surroundings.  I was immediately taken in by smell of peat in the air.  Doolin seemed like a place out of a fairy tale...basically 3 pubs and a cluster of accommodations...how could such a little place be a center of Irish music?  What else to do but hit those three pubs and try and find out! 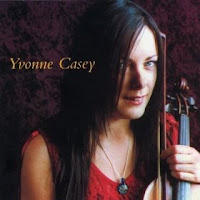 We noticed signs up in McGann's announcing a CD release party for Yvonne Casey the next night.  Later that first day, while having dinner at the Doolin Cafe, we got to hear the self-titled Yvonne Casey CD being played in the restaurant.  It had a unique sound like nothing I had ever heard before, which in some ways holds true to this day, even though I am much more acquainted with that style of music now than I was then.  I ended up buying the CD in a pub later that evening, which allowed us to listen to it on repeat the next day as we drove around the Burren taking in the sights.  By the time of the CD release party on night 2, I'd say we were fairly familiar with the tunes but still not sure what we were in for.

McGann's was packed that night.  Despite the fact that Yvonne Casey was already a member of the band The Ceili Bandits, which had a couple albums out, this was a big deal for the local girl to be releasing her very own CD.   In addition to Ceili Bandits band members Quentin Cooper and Eoin O'Neill, several other accomplished musicians were on hand to sit in on some tunes and lend support, including guitarist and singer Luka Bloom, bodhran player Ger Hoyne, fiddler James Cullinan and tenor banjoist Kevin Griffin (and probably many more I'm not aware of).  I had no idea what an all-star lineup this was. 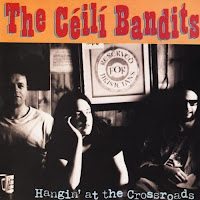 The rest of the evening is kind of a blur, and not just because I'm remembering it some 7 years later.  It was kind of a blur the next day as well - massive amounts of Guinness, Smithwick's, some Bulmer's, champagne and who knows what else saw to that.  I do remember having one of those "aha" moments where you feel like something very special, perhaps even life changing, is going on.  Fortunately we got some pictures.  At some point in the later hours long after "closing" it had evolved into a session attended by a few drunken hangers on, including Laura and me.  It was probably 4am when we finally snuck out of there with the music still playing.

It would take two more years and two more visits to Ireland before I would decide to take up Irish tenor banjo, but that night in Doolin has had a lasting impression on me. To this day, the Clare region is still my favorite and I have yet to hear any better trad recordings than that Yvonne Casey CD and the Ceili Bandits album Hangin' at the Crossroads, which features basically the same lineup. In recent years Doolin's reputation as a hub for music has become well known and the result, unfortunately, is a less than attentive crowd at the pubs and less authentic sessions.  Nowadays, for music, you might be better off going to nearby Ennis or Lahinch.  The Ceili Bandits have a Facebook page and are currently doing a regular gig at Kenny's in Lahinch on Sundays.  Band members Yvonne Casey, Quentin Cooper and Eoin O'Neill have become my favorite trad musicians, and I try to track them down whenever I'm in Clare.  Quentin and Eoin still host a longstanding session at Brogan's in Ennis on Tuesdays and Thursdays, if I'm not mistaken. Below is a video featuring these guys.

We would return to Ireland in 2005, 2006 and 2009 (and have plans to return in 2012), but despite seeing many places and having awesome, unique visits on each of those occasions, we've never been able to recreate the magic felt on the night of the CD release party in Doolin.
Email ThisBlogThis!Share to TwitterShare to FacebookShare to Pinterest
Be a Fan
Posted by Tanner Llewellyn at 1:42 PM