The Killdares - Up Against the Lights DVD review

I had not heard of the Dallas, Texas Celtic rock band the Killdares before I watched their recently released concert DVD Up Against the Lights. The first thing I noticed was the professional look.  There's a polished, modern style to the editing that gives it the feel of an arena rock show.  The second thing that got my attention was the non-stereotypical songwriting evident in their originals.  I was halfway expecting standard songs about whiskey, murder and politics - you know...Celtic rock stuff - but actually what I picked up on was a 1960's "smile on your brother" kinda vibe coming from drummer and lead vocalist Tim Smith's lyrics.  Pleasantly surprised.

While the lyrics may have a folk-rock bent, musically the Killdares have more in common with Aerosmith or Led Zeppelin.  This is mainly due to the playing style of electric guitarist Brek Lancaster, who must have spent some time in bands of that nature.  If you took away the fiddle and bagpipes The Killdares wouldn't sound all that Celtic to my ears, but as soon as those instruments join in they perfectly blend with what the guitarist, drummer and bassist Gavin Kelso are doing in a way that does not sound forced.

Yes, the fiddling of Roberta Rast and the bagpiping/uillean piping of Matt Willis are what put the word Celtic into descriptions of the Killdares, allowing the group to serve as a sort of gateway band for rock fans with an interest in Celtic music. Roberta and Matt are both excellent players of their chosen instruments, and it's especially cool to hear the somewhat exotic uillean pipes in this context. (Uillean rhymes with illin' like a villian). The Killdares have also perfected an exuberant video-friendly stage presence that adds to the buzz exerted by the music. On the other hand, a highlight for me came late in the DVD when Tim Smith switched to bodhran for a medley of acoustic fiddle tunes with Roberta Rast before the rest of the band joined in; toning things down a bit to focus on the essence of the music. 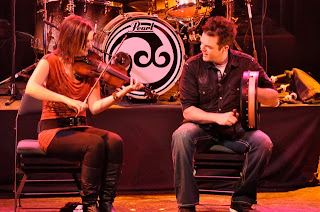 Included in the DVD's bonus features is a casual interview with the band members that shows them to be more humble and down to earth than the fearless, no holds barred performers depicted in the concert film.  That interview left me with an even better impression of the people in the group.  A two CD audio recording of the complete concert (7/30/10, Granada Theater, Dallas, TX) is also included as part of the 3 disc special edition.  Audio-only is another great way to experience this recording - just you and the music with visions of peace-loving leprechauns dancing in your head!
Email ThisBlogThis!Share to TwitterShare to FacebookShare to Pinterest
Be a Fan
Posted by Tanner Llewellyn at 10:41 PM