Portland, Oregon's The Woolen Men aren't a new band, but they are new to me. I guess their earliest recordings date back to 2009. Quite a few of The Woolen Men's albums, tracks and EPs are on Spotify, which is where I found them. Or rather Spotify's algorithm brought them to me. 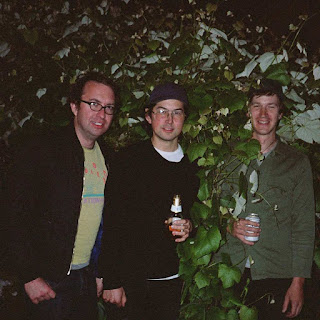 (I'm temporarily stumped as to how to add a caption to the above photo, but even if I could figure that out I still couldn't do it properly because this is just some random photo from 2015 or earlier that I found online. I don't know who took it but you can tell it's an older picture because it's back when beer was cool.)
The Woolen Men are a rock trio - guitar, bass, drums. I could use terms like post-punk, college rock, jangle pop(?), stripped-down, and DIY. Someone hipper than me could probably name drop some obscure record shop guy influences or similar sounding present-day bands. The ones that come to mind for me are earlier trios with the same instrumentation - The Police, Meat Puppets, The Minutemen. More recently maybe Hammer No More the Fingers.

Sometimes there is no The in the band name. Sometimes it's just Woolen Men.

My favorite Woolen Album might be Human To Human, although clocking in at less than 25 minutes it's more like a long EP perhaps. Their 2018 album Post is equally good, if not better upon repeat listening. In fact, I like everything I've heard by this band!

Of course I wasn't satisfied with just liking The Woolen Men. I had to check out the Fans also like section of Spotify and do similar research on Bandcamp and AllMusic in an effort to find more bands of this ilk - past or present. Unfortunately that search didn't turn up much, although it did turn me on to some weirdo groups like Mope Grooves and Lithics. My inability to find other bands in this style and at this level is a confirmation of how good these Woolen Men are.

Email ThisBlogThis!Share to TwitterShare to FacebookShare to Pinterest
Be a Fan
Posted by Tanner Llewellyn at 7:58 PM