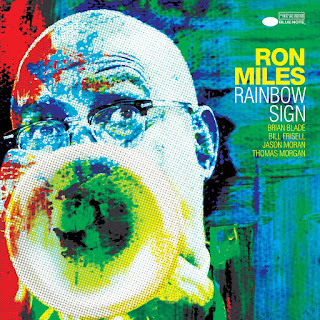 For some reason this year I haven't been as motivated to keep up with new releases as I should be. Despite this, I was more than ready for the gifts that old favorites Bill Frisell and Gillian Welch have given us in 2020. Just gimme something I'm used to!

Bill Frisell's output and recording sessions are vast. But one thing he had never done until this year is release a studio album documenting his trio with Rudy Royston (drums) and Thomas Morgan (bass). I've made two separate trips to New York City in recent years to see this trio, so I know how magical the music they make can be.

This trio could have easily recorded several hours worth of material (and maybe they did), but I'm not going to complain about the solid 65 minutes presented on their debut album Valentine, which came out in August on Blue Note Records. Like a lot of Frisell's work, this is a slow burn with an emphasis on restraint. It might not dazzle you but there is some serious umph bubbling here - a three-brained alchemy with non-perishable ingredients.

Never one to rest on his laurels, Bill Frisell is a band member in another Blue Note release just out. I'm talking about Rainbow Sign by Ron Miles. This might just be the album of the year. Cornetist Ron Miles is a gifted composer. His tunes sound like songs. Like instrumental versions of songs you could sing along with, if they had words. Ron Miles has re-assembled his A-List band on Rainbow Sign: pianist Jason Moran, guitarist Bill Frisell, bassist Thomas Morgan, and drummer Brian Blade. Yep, Thomas Morgan again too. He's got to be one of the best bassists in jazz. 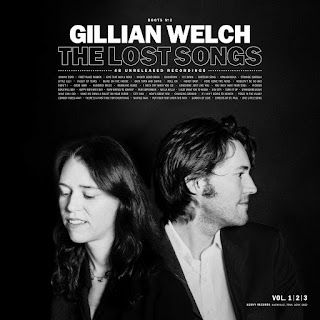 Unlike Bill Frisell, prolific is not a word used to describe Gillian Welch. Not until now. This year she's been releasing her "Lost Songs". When it's all said and done, the three volume collection will add almost 48 songs to her canon (at least for now). The first two sets are already out, tracks 1 through 32, and I'll say this: Gillian's so-called throwaway songs are better than almost anyone else's regular songs, at least anyone whose last name is not Prine. That's not an original thought but it's the truth. Some of these songs sound like the best songs she's ever written. Chinatown, as one example.

All it takes is a few listens and then these recently introduced Gillian Welch songs will be in your head forever. The melodies may not seem distinctive at first, but that's part of her genius. She uses a familiar style to find never before explored nooks and crannies. Two parts Carter Family, one part Soft Boys.

As a bonus Gillian Welch and David Rawlings have put out a newly recorded surprise album of covers called All the Good Times. On this one they stretch out a little bit, taking extended instrumental choruses between verses which allows David to demonstrate his heady soloing style. The only glaring omission I can think of on this album of covers is the lack of a Grateful Dead song. This loose style would have really suited a He's Gone, Ship of Fools, Candyman or China Doll. Oh well. We did get Oh Babe It Ain't No Lie and Señor, which are almost Grateful Dead songs anyway! Plus a Ginseng Sullivan for the Norman Blake fans out there.

Email ThisBlogThis!Share to TwitterShare to FacebookShare to Pinterest
Be a Fan
Posted by Tanner Llewellyn at 7:11 PM