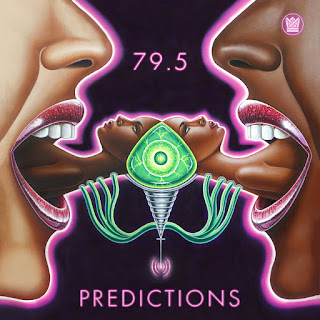 Before my Best of 2019 comes out, here are some 2018 albums that, had I known about them at the time, could have possibly made it onto the previous year's best of list.

Alan Hawkshaw and Brian Bennett - Full Circle (2018)
Back in the 1970's, keyboardist Alan Hawkshaw and drummer Brian Bennett were part of a team of UK musicians working for the KPM label who created hours upon hours of what is called "library music". Essentially their 9 to 5 job was to compose and record a library of stock music that clients could use in commercials, TV shows, movie soundtracks, radio filler, theme music - you name it. Often the music was made prior to it being commissioned for a particular project. Someone who needed music for the intro of their tennis match or for a chase scene in a low budget action film would choose among the KPM music available. It didn't really matter if someone else had already used it elsewhere.

In particular, the music that Hawkshaw and Bennett came up with was so funky and chic that - although not intended to be consumed this way - gained its own following among hip-hop producers and rare music enthusiasts. Their "not for sale to the general public" LPs became collectors items. Long story short, Hawkshaw and Bennett - now senior citizens - got back together in 2018 to record a whole new album of music in their classic KPM style. Full Circle is definitely an homage to library music's heyday, but with twelve new original tracks it might be better than anything they ever did before. I love this record! Don't get fooled into thinking that it's just smooth jazz. It really grows on you.


IE - Pome (2018)
Pronounced "Eee", IE is a little known young band from Minneapolis. Of all the performers at the 2019 Big Ears festival, IE probably got the least promotion - as in zero - but I had a hunch they would be good so I made a point of catching their one set which took place late at night at the tiny bar/performance space called The Pilot Light. That ended up being a peak musical experience and a highlight of the festival. I bought the vinyl of Pome immediately after the gig and then played it again that night - now probably like one or two in the morning - at a pretty decent volume on the cheapo record player at the AirBnB, where it sounded p h e n o m e n a l.

I'm not sure what kind of music IE is. Maybe the music of ancient pagan rites from a futuristic dimension, as played by the ghosts and faeries in a Marosa di Giorgio poem? It's kind of like the long, patient, almost ambient jams that Phish would get into around 1999/2000 such as the the 6/14/00 Twist from Fukuoka, Japan. There's probably some Sun Ra, Wendy Carlos or Delia Derbyshire in there too. Who knows? The ritual drumming, the synths, the keyboards, the far out vocals - it all works.

79.5 - Predictions (2018)
I have to thank Spotify for this. It put a track from Predictions on my Discover Weekly playlist and instead of instantly fast forwarding to the next track like I often do when skimming through these types of Spotify curated playlists, I stuck with it. If Spotify could talk it would have been saying, "you seem to like ESG and BadBadNotGood so you'll probably also like 79.5".


Delvon Lamarr Organ Trio - Close But No Cigar
This band tours constantly, playing blue breakbeat, organ-trio, funk-laden soul jazz. Delvon Lamarr's name might be titular, but his secret weapon and co-star is guitarist Jimmy James who is probably one of the most exciting performers you will ever see. The good vibes are contagious when this band takes the stage. Close But No Cigar does a good job of capturing a live sound in the studio. No trickery, no "production", no-frills. Just grooves. It could have been recorded yesterday or forty or fifty years ago.


Luke Bergman - Worx (2018)
This is the kind of music I love to happen upon. These ten tracks are an example of the kind of cool music that a talented multi-instrumentalist can put together with today's home recording capabilities. Bergman plays all the instruments heard on Worx. The first track Morning Person is almost an instrumental version of John Prine's Christmas in Prison, until you realize that Christmas in Prison's melody probably comes from some deeper collective subconscious. Track by track this music just kind of morph's into whatever Bergman felt like writing or recording that day.

Luke Bergman is not just some completely unknown DIY Bandcamp type person. He's actually a member of Bill Frisell's new HARMONY ensemble. So the guy has some cred. Bergman describes Worx as "Donkey Kong Country as a Hallmark movie."

Dungen and Woods - Myths 003 (2018)
I used to have Swedish band Dungen's 2004 album Ta Det Lugnt on CD. The Dungen on 2018's Myths 003 does not sound like that though. This Dungen is more mellowed out, pastoral, and hippie-ish than the harder rocking band of 15 years ago. Since this is a collaborative project it could be the influence of Woods. I don't really know anything about Woods but they are described as an American folk rock band from Brooklyn. Between Dungen, the movie Midsommar, and the northern-voodoo inspired band Goat, something trippy is going on in Sweden. The seven song, thirty minute Myths 003 is a pretty vibey and laid-back listen, flower children.

Sandcatchers - What We Found Along the Way (2017)
Oud and lap steel. Come on. That's all I had to know before wanting to listen. There's an ECM meets meets Windham Hill type of thing going on here. The African/Middle Eastern (almost banjo-like) flavor of Yoshie Fruchter's oud mashed up with the experimental Americana tones of Myk Freedman's (almost dobro-like) lap steel guitar. I want to see this band out live some day.


Email ThisBlogThis!Share to TwitterShare to FacebookShare to Pinterest
Be a Fan
Posted by Tanner Llewellyn at 3:42 PM

Labels: Best of the Year