I read over thirty books this year, mostly fiction. Here are ten favorites. 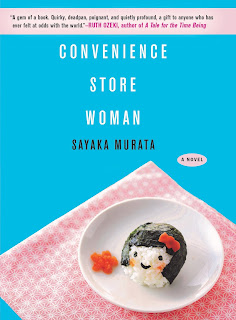 Convenience Store Woman by Sayaka Murata
A brilliant novel about a single/unmarried 36 year old woman, Keiko Furukura, who has spent the last 18 years of her life diligently working the same menial job in a Japanese convenience store. She is comfortable with her life, but feels out of place in a society that pressures her to conform to its expectations. One of the most remarkable characters I've ever encountered. Inspirational. Translated from Japanese by Ginny Tapley Takemori.

Sealskin by Sue Bristow
Dabbling in magical realism, this novel is based on the Scottish legend of the selkie - seals who take human form after shedding their skin. After reading Michael Crummey's Galore and Eowyn Ivey's Snow Child in 2018 I was hungry for more of that ilk and Sealskin filled the void.

Aug 9 - Fog by Kathryn Scanlan
I'm so glad to have learned about this slim, spare book. It is the product of Kathryn Scanlan finding the dilapidated, waterstained diary of a random 86 year old mid-western woman at an estate sale. For 15 years Scanlan studied the diary - playing with sentences, cutting and pasting entries and rearranging it to flow as one narrative composition. The result is a beautiful form of homespun poetry. Very influential.

The Grip of It by Jac Jemc
Modern horror just doesn't seem to be as good as the vintage stuff from the 1970's and 80's. It's usually either too young adult, too "me too", too PC, or all of the above while being written in an annoying millennial voice. The Grip of It is the exception - a contemporary telling of the classic haunted house story. Done in a way that feels both in-line with tradition and non-derivative.

Dark Matter by Michelle Paver
I love fiction as told through journal entries. In this case the format delivers one of the most chilling books you'll ever read. In 1937, a down on his luck Englishman joins a year long scientific expedition to the Arctic. Over the next 200 pages things get increasingly eerie and unhinged.

I read several horror novels this year, vintage horror novels, but I'm going to limit my list of vintage horror to just ones published by Richmond, VA based Valancourt Books. Valancourt has a knack for rediscovering rare and overlooked out-of-print gems. I learned about them this year and they are the primary reason for rekindling my interest in horror fiction. Here are my five favorite Valancourt Books read this year. Some are from their Paperbacks from Hell series. 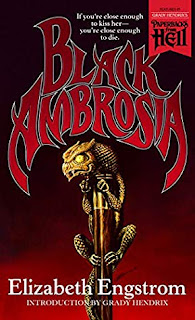 The Elementals by Michael McDowell
The haunted house genre goes for a Southern Gothic spin in this overlooked classic from 1981. On Alabama's Gulf Coast a well-to-do family encounters a terrifying presence in an uninhabited Victorian mansion.

The Spirit by Thomas Page
An over-the-top 1977 Bigfoot novel that is actually really good. I wasn't expecting this one to be much more than fun, but it was that and more.

Black Ambrosia by Elizabeth Engstrom
From almost the first page I had the feeling that I was reading a book that would be an all-time favorite. A slight lull about two-thirds of the way was the only thing that killed that buzz. I tend to like dark, horror books with teenage female protagonists and Black Ambrosia pretty much sets the standard. I'm looking forward to reading this one again to see if it's as good as I remember, or better.

The Bog by Michael Talbot
I actually found a used 1980's mass-market paperback copy of The Bog before I realized that it was one that Valancourt had reprinted. This horror novel seems pretty conventional at first and then starts taking some surprising turns. I wish they all could be this good.

Nightblood by T. Chris Martindale
This 1989 one-off men's action-adventure horror paperback is so meta that it feels like a 2019 book set in 1989 rather than a 1989 novel set in its present day. Imagine a Vietman-vet hero straight out of a Chuck Norris or Sylvester Stallone movie. Now imagine him as an uzi-toting vampire hunter. You nailed it. The first book in a series that never happened, the Nightblood story-line could easily be picked up by a writer like Grady Hendrix. The sequels would almost write themselves.


Email ThisBlogThis!Share to TwitterShare to FacebookShare to Pinterest
Be a Fan
Posted by Tanner Llewellyn at 7:55 PM