For me 2016 was as much about discovering or re-discovering older records as it was about keeping up with the latest releases.  Nevertheless, I was grooving to some new albums this year so I'll list my five favorite new albums first. 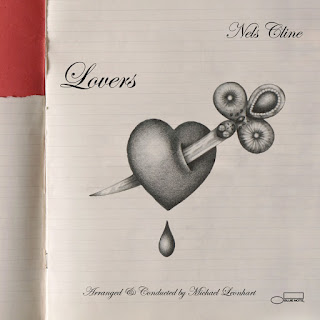 Nels Cline - Lovers
2016 was full of old vinyl findings and some of the ones I liked best are in the cheesy, mod, bachelor-pad category.  That's the very reason this Nels Cline record is so great.  It's brand new but approaches that vintage sound in a wise, refined way that is all meat, no cheese.  Lovers is strong all the way through but every time the Sonic Youth cover "Snare, Girl" would come on it would catch my ear as the standout track. Naturally I had to get this on vinyl.

American Babies - An Epic Battle Between Light and Dark
Rock and roll is a dying you know, but you'd never know it by this album which covers lots of ground from jamband to alt. country to arena rock, and more.  Tom Hamilton's American Babies has been around for a few years but this year their profile really elevated due in part from the strength of this work.  Go see them live.  Such a great band.

Holly Bowling - Better Left Unsung
Holly Bowling followed up her 2015 album of solo piano interpretations of Phish songs with, yep, an album of Grateful Dead songs re-imagined for solo piano.  A perfect choice as far as I'm concerned.  If anything, this album tops the previous one in terms of sheer beauty.  The song list is extremely strong: she picked top shelf Dead songs while still avoiding some of the more overdone, obvious choices.  Holly has a deep connection and reverence for this material and her thoughtful arrangements and interpretations makes this easily my favorite Grateful Dead tribute album of all time.  Holly's own skills as an improviser are becoming more and more evident, most notably in the 27-minute exploration of Dark Star.

Mary Halvorson Octet - Away With You
Mary Halvorson's sessions as band leader keep getting larger and larger.  This time she's up to 8 in the ensemble, thanks to the addition of steel guitarist Susan Alcorn.  Away With You is the most recent addition to the trajectory that began in 2008 with Dragon's Head, a trio recording.  Some day I want to do a listening marathon where I play Dragon's Head (2008), Saturn Sings (2010), Bending Bridges (2012), Illusionary Sea (2013), Reverse Blue (2014) and Away With You (2016) all in succession just to hear the progression taking place.  I guess I'll need to do this soon before Mary adds to that list.  Mary's guitar artistry is already well known, but her legacy as a composer and band leader is starting to take shape as well.  I also really liked her highly-improvised guitar duo album with Noël Akchoté that was quietly released this year.

Charles Lloyd and the Marvels - I Long To See You
This laid-back jazz album plays heavily on country, folk and Americana themes.  78 year old Saxophonist Charles Lloyd is new to me, but I was really drawn to his sober readings of the head melodies to these tunes.  Don't get me wrong, he goes "out", but more importantly he also knows how to go "in".  There's a deep connection to tradition in every note he plays.  Bill Frisell is on here and anything with him is bound to be golden.  Plus, these types of songs are right in Frisell's wheelhouse.  The other musicians - Greg Leisz on pedal steel, bassist Reuben Rogers and drummer Eric Harland - pretty much crush it as well.  Guest vocal turns by Willie Nelson and Norah Jones certainly don't hurt.  It's rare to hear music exuding this much love.

The Upsetters - Return of Django
I found this album via Jamaican guitarist Ernest Ranglin's recently re-released 1969 album Boss Reggae.  There's a track on Boss Reggae called Soulful I that I really took notice of, which I learned was a Lee Scratch Perry tune released earlier in 1969 under The Upsetters' name.  Return of Django is pretty awesome.  It sounds like a stoned version of a spaghetti western soundtrack, chock full of repetitive melodies that are brilliant because of their simplicity, not despite of it.  If you have a keyboard at home (or better yet, an organ) you need to start sounding out some of these tunes on it.

Duke Ellington, Charles Mingus and Max Roach - Money Jungle
I took a chance on this 1963 album and bought a brand new vinyl copy at Deep Groove Records in Richmond without knowing anything about it.  The word "Essential" was hand-written on the plastic sleeve by store employee Chris Pittman.  That was enough of a testimonial.  There's some massive tension and power on display in this motherfucker.  I don't know what was going on in the studio that day, but Mingus plays his bass like his life depends on it, and Max Roach makes sure the drums have equal say.  Not to be outdone, the elder Ellington shows these two hipsters a thing or two about music before it's all said and done.  This is either a prime example of collective improvisation or collective chaos - sometimes they are having one musical conversation but more often three competing voices are shouting to be heard.  Very essential indeed.

Camper Van Beethoven - Telephone Free Landslide Victory
Telephone Free Landslide Victory was already known to me, but getting it on LP and diving back in has propelled it into the "desert island disc" category.  So much so that I learned how to play nearly all of its instrumental tracks on my tenor banjo this year, including Yanqui Go Home, Payed Vacation: Greece, Skinhead Stomp, Mao Reminisces About His Days in Southern China, Balalaika Gap, and Opi Rides Again.  In addition to those quasi-ethnic instrumentals, the song songs are some of the best examples of the snarky, freaky, acid-drenched Santa Cruz, CA attitude that defined CVB's early work.

Lucinda Williams - Car Wheel On A Gravel Road
Do you ever go through periods of your life where the portal between the real and the surreal, the natural and supernatural seems to be open wide?  The Third Eye, if you will?  Well, this album found me in a time earlier this year when that door was wide open and every song on Car Wheels On A Gravel Road took on a deeper but definitely out of context meaning that felt entirely apropos.  Because of the way this album oozed its way into my psyche it is lodged in there forever now, sitting right alongside John Prine.

Louis Nelson Big Four - Volume 1 and Volume 2
My exposure to New Orleans jazz is still in its infancy, but it's taken a recent boost upon the discovery of banjoist Emanuel “Manny” Sayles. After searching out some of the recordings he plays on, I’ve honed in on these Louis Nelson Big Four recordings (volumes 1 and 2) as overall favorites. These feature trombonist Louis Nelson, clarinetist George Lewis, pianist Joe Robichaux and Manny on banjo. I dig everything about these mostly instrumental cuts recorded on August 1, 1964: the cozy yet sonically clear recording quality, the lazy pace and relaxed vibe, the somewhat eccentric but non-flashy warts and all soloing, the small-band interaction full of homegrown non-intellectual contrapunal countermelodies, and the rough/unrehearsed jam session nature to it all. Most notably, you can really hear Manny’s staunch banjo strumming and craggy solo plucking.  This is ground zero in ear training for me at the moment.


Email ThisBlogThis!Share to TwitterShare to FacebookShare to Pinterest
Be a Fan
Posted by Tanner Llewellyn at 10:39 PM