My goal at the beginning of the 2013 was simply to be able to fake my way through Irish sessions, old-time jams, and other informal gatherings where music is played.  I feel like I met that goal on a short-term level, but the use of the phrase “fake my way through” implies that there may have been something disingenuous about this approach.

During the 1st three-quarters of 2013 I focused on increasing my repertoire of Appalachian and Celtic tunes through rote memorization.  I was primarily motivated to do this so I could build up a list of bare bones tunes that – if necessary – I could lead at the Ashland jam.  I continued to attend other jams and sessions and took part in a few intimate house sessions and special occasion jams like the ones I organized at Midnight Brewery.

These ongoing experiences, along with the saturated exposure to traditional music at Clifftop and Rockbridge, contributed to a greater familiarity with the tunes and an increased comfort with attempting to play them on the fly.  When at home, I strived to find new ways to make my practice as productive as possible; attempting to get something tangible out of it on a daily basis.

In late summer I made a new musical discovery:  the Bonne Humeur album by The Etcetera Stringband.  This instrumental album of early Caribbean and Creole dance music – tunes from Haiti, the Virgin Islands, Venezuela, et cetera – revealed a whole new genre of music worth exploring.  With the help of a transcriber, I now have the notation for all 18 tracks on this album plus a few more in this style. 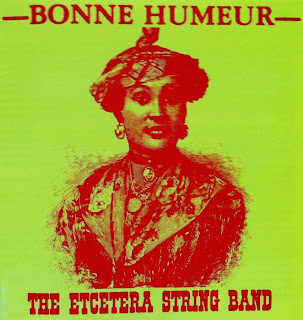 2013 was also the year where I gained more familiarity with ragtime.  I am in the process of learning over a dozen raggy tunes, including Plowboy Hop, Maybelle Rag and Doc Brown’s Cakewalk.  In addition, I’m starting to go back and learn some of the Minnesota/Wisconsin style waltzes in the Mandolin Uff Da! tunebook, which could inspire the learning of additional tunes in three-quarter time…a rhythm I had been avoiding until now.

As the year went on I diverted my attention from an ever increasing list of “tunes to learn” to try singing and playing some songs for fun, such as Wading in the Velvet Sea (Phish), She Wanted To Leave (Ween), Like a Dime (Eamon O’Leary), Ship of Fools (Grateful Dead), Lowlands (Gillian Welch), and Good Guys and Bad Guys (Camper Van Beethoven).  I hope to continue to allot some time each day for playing and singing songs.

Most recently, I’ve started to target specific areas of weakness, such as my nascent ear training.  This is being partly addressed in the form of lessons from Dennis Elliott by applying his mandolin study to tenor banjo.  I’m also starting to play baritone ukulele and have learned two tunes so far on uke:  the basic melody to Sonny Rollin’s St. Thomas and the carol In the Bleak Midwinter.  I may supplement my lessons from Dennis Elliott with occasional lessons from John Gonzalez at Fan Guitar and Ukulele.

Things may be starting to “click” in ways that I never before anticipated.  I’m hoping that this is the impetus for an upcoming domino effect of learning.  However, at every musical plateau one is reminded that there is so much more to learn.  As Curt Kirkwood says, there’s "nothing on the top but a bucket and a mop and an illustrated book about birds".
Email ThisBlogThis!Share to TwitterShare to FacebookShare to Pinterest
Be a Fan
Posted by Tanner Llewellyn at 6:36 PM