A New Kind of Practicing

Thus far the type of music that my playing has centered on - Irish and oldtime fiddle tunes - has caused me to think in terms of static melodic lines devoid of chords.  I'd like to continue to use traditional melodies as fodder for learning, but analyze them from the ground up in terms of structure, chord changes and improvisation.  You can essentially take any tune or song and use it as a form of study. 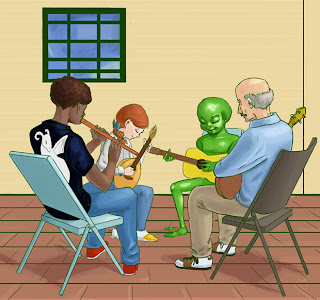 Listening to identify the chord changes - by number - before determining the key and before playing the melody, would be the opposite of what I've been doing.  Once you figure out a song's structure, chord pattern and key, you can then try making the chords in as many different shapes and positions on the neck as you can come up with.  Play them all open, play them all closed and in different inversions/combinations of this.  Play that same chord pattern in a bunch of different keys as well.

Then you can try and transcribe the melody of the tune while also analyzing it.  For example, does the melody start on the 5th note of the scale?  Did the chorus seem to start on the four chord?  If so, which melody note is that? Analyze the movement of the melody and chords in such a way that you can provide an explanation for everything that's happening in the song.  Understand where every note falls in relation to the scale.

Once you have the basic melody worked out, apply variations to it by adding triplets, double stops, fills and other ornamentation, or just improvise over it from a jazz perspective.  You can also isolate certain phrases and transpose them to other modes.  Take that G-major lick and change it to D-dorian.  Did that change any of the intervals? 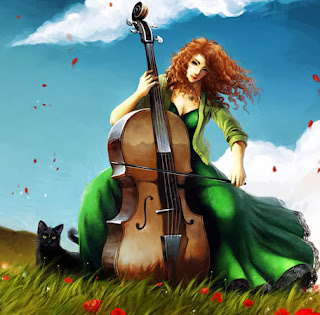 Do enough of these kinds of exercises,  while also regularly working with a teacher or mentor to keep you on track, and you're bound to see some improvement.
Email ThisBlogThis!Share to TwitterShare to FacebookShare to Pinterest
Be a Fan
Posted by Tanner Llewellyn at 8:40 AM