The Jamband Scene in Colorado at the Time 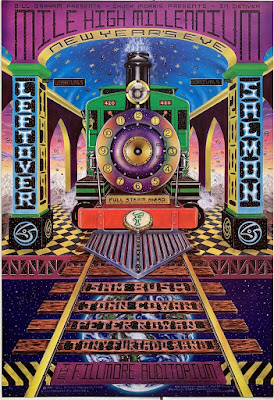 I spent the years 1999, 2000 and 2001 in Colorado. A short but influential time. I never did take up skiing, but by moving to Colorado I suddenly had hiking - real mountain hiking - a short, scenic drive away. There were cool, small mountain towns to visit including Lyons, Nederland, and Estes Park. And the local craft beer scene had achieved liftoff thanks to Left Hand in Longmont, Mountain Sun in Boulder, Oskar Blues in Lyons, and New Belgium in Fort Collins, home of the mythical Fat Tire. Beer was important to me at that time.

Most importantly though, Colorado was a mecca for music, particularly jamband music. My life was based around and defined by this. Previously having lived in Richmond, VA I often had to drive 2 hours to the Bayou in DC, 2 hours to the Boathouse or Norva in Norfolk, 1 hour to Trax in Charlottesville, or yikes 2.5 hours+ to Raleigh/Durham/Chapel Hill to see the bands I wanted to see. In Colorado the bands came to you.

Boulder was the hub. Between the Fox Theater, the Boulder Theater, or the more intimate and beloved Tulagi, there was something to see in Boulder every week without fail. Performers would often do two nights in Boulder. If not, or if that wasn't enough, there was also Denver, home of the Fillmore, the Gothic Theater, and Quixotes, as well as the Aggie Theater in Fort Collins. All you had to do to fit in in Ft. Collins was replace your Patagonia with Carhartt and you were good to go. For outdoors open sky venues, always a weather risk in CO, there was Red Rocks and Mishawaka. Slightly farther away was a super fun heady venue called State Bridge Lodge.

Instead of Phish Big Cypress in Florida (which I may not have gone to anyway) I spent Y2K New Year's Eve 12/31/99 seeing Peter Rowan, Sam Bush and Leftover Salmon in Denver.

Except for maybe San Francisco I can't think of any place better positioned in the late 1990's for this type of music. Certainly no other smaller cities had what Boulder had - a confluence of outdoor activities, hippie vibe, and music scene. OK, maybe Burlington, VT or Asheville, NC or Eugene, OR or Athens, GA or Santa Cruz, CA...but that would have probably been to a lesser extent wherever you went.

The list of bands that rolled through included Karl Denson's Tiny Universe, Dark Star Orchestra, Sound Tribe Sector Nine, moe., The Big Wu, Phil and Friends, Strangefolk, Steve Kimock, and many, many more. Of course the local scene was already well carved by local heroes String Cheese Incident and Leftover Salmon, and just before we moved to CO there was internet talk of an awesome bluegrass band with unheard of jamband sensibilities called Yonder Mountain String Band. In fact, that word of mouth buzz was probably the tipping point in feeling assured enough to make the move. I placed a lot of faith in a hunch that Yonder was going to be great. And they were.

The Jeff Austin led Yonder Mountain of this early era was small enough to feel ultra local - you could still see them in tiny venues like Wolf Tongue in Nederland, Mountain Sun in Boulder, or Oskar Blues in Lyons (and watch them grow before your eyes) - but good enough to not feel like you were coming down several rungs by seeing some local band instead of say, Phish, whom we had pretty much abandoned back on the east coast. Phish would play Denver once during the years I was in CO, but I also had to drive as far east as Kansas or as far west as Vegas to keep seeing them. This was long before Dick's. YMSB had to fill that #1 band void and for a few years there they did, with help from STS9.

When I did move back to Virginia post nine-eleven I often found myself driving all the way to Asheville, NC - a good seven hour trip each way - to keep the party going. It was the closest Appalachian thing we had to the high-peaked Colorado atmosphere out west. Richmond did eventually get its act together and also my taste would continue to evolve to where I became more interested in what might be going on in New York City over whatever sounds some stoned vanilla hippies were making in the mountains of Colorado. But I don't regret that time at all though. It was like one continuous vacation while it lasted.

Email ThisBlogThis!Share to TwitterShare to FacebookShare to Pinterest
Be a Fan
Posted by Tanner Llewellyn at 6:46 AM