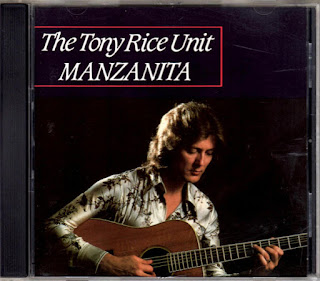 The passing of Tony Rice made me realize that I went through a bluegrass "phase". It was a many years long phase, but a phase nonetheless. It preceded the 2000 release of O Brother Where Art Thou so thankfully that wasn't really a driver. My gateway to bluegrass was via The Grateful Dead. I first got their acoustic album Reckoning, which led to the Jerry Garcia Acoustic Band, Garcia/Grisman, and Old and In the Way. Which then led to Norman Blake, John Hartford, New Grass Revival, and Hot Rize. Which, of course, all led to Tony Rice in one way or another.

This was the mid to late 90's before Spotify and YouTube streaming services. If you wanted to hear an album you pretty much had to buy it. So unfortunately at that time I didn't get to hear every recording with Tony Rice on it. However, I did my research and made the following three choices: Tony's Manzanita album from 1979, the self-titled 1975 J.D. Crowe and the New South album featuring Tony Rice on guitar and lead vocals, and Bluegrass Album Band Vol. 3 - California Connection from 1983, again with Tony on guitar and vocals. Pretty good choices. As I listened back to these yesterday I was reminded that I must have listened to them A LOT! Manzanita in particular is easily a candidate for the best bluegrass album ever recorded. I eventually got the classic first Blake and Rice CD as well. Tony's singing and his guitar playing were equally distinctive.

I got to see Tony Rice perform at least four times. Twice with Norman Blake at the intimate Prism Coffeehouse in Charlottesville as Blake and Rice. The first time must have been around 1995. Then The Tony Rice Unit once as part of the VCU Guitar and Other Strings series. And also at Rockygrass in Lyons, CO with Peter Rowan and others. He had pretty much stopped singing by the time I first saw him live, but his guitar playing was still in full command. It was especially fun to see the push and pull of Tony Rice and Norman Blake playing together, as Tony would push Norman to "pick it son", while Norman would mellow out some of Tony's intensity.

It's obvious now that this was only the tip of the iceberg, and that I have let many years get between me and the bluegrass I used to listen to. If you're around my age - of the Leftover Salmon into Yonder Mountain generation - then these Tony Rice recordings feel like standards. The standard versions for many bluegrass songs. Even though quite often what Tony was doing was simply re-interpreting a previous generation's standards. Pretty impressive.

The last thing I'll mention is for every person Tony inspired to pick up a guitar, he probably also convinced someone else to give it up in defeat!  He was so precise, so technically perfect, that except for the most dedicated and talented, emulating him wasn't an option. When you start listing the guitar players of guitar players - Django, Jerry, Trey, Frisell, Doc, Norman, Wes, Grant Green... - Tony Rice is on that list!

Email ThisBlogThis!Share to TwitterShare to FacebookShare to Pinterest
Be a Fan
Posted by Tanner Llewellyn at 11:10 AM