Here are five different musicians I've learned about over the past month. 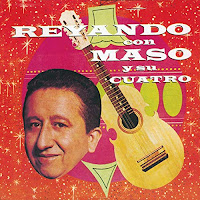 Maso Rivera - Puerto Rican cuatro player
Maso Rivera was born November 13, 1927 in the Toa Alta municipality of Puerto Rico. He began playing the cuatro at the age of five. The cuatro is Puerto Rico's national instrument, kind of like a cross between a guitar and mandolin, and Rivera wrote over one-thousand compositions for it. In the early 1930's when Maso began playing as a child the cuatro was square shaped and had four strings, but the Puerto Rican cuatro evolved into a viola-like shape with five double course strings tuned in all 4ths BEADG from low to high. Its scale is about 20.5 inches.

I first learned about Maso Rivera two weeks ago when Dust to Digital posted about him on his birthday. I clicked play on the video they shared, liked what I heard, and looked Maso up on YouTube and Spotify. The album I immediately started listening to and loving is called Reyando Con Maso Y Su Cuatro. My first thought was that it reminded me of David Grisman's Dawganova CD from 1995, but then I started to notice the exceptional sound of the cuatro. I had no idea that Puerto Rico has such a rich and distinctive folk music tradition. And I was psyched to learn about the Puerto Rican cuatro and its cousin instrument the tiple doliente! 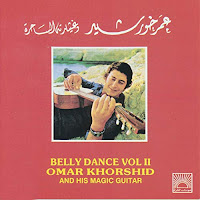 Omar Khorshid - Egyptian guitarist
I learned about Egyptian guitarist Omar Khorshid from a Dusted magazine feature written by English musician C Joynes that I read in late October. Khorshid was born in Cairo in 1945. He made several recordings in the 1970's and had a short, successful career before a 1981 car accident took his life. Omar Khorshid embraced the emerging sounds, styles and technologies of his day by adding surf-style electric guitar and synths to traditional Arabic melodies. 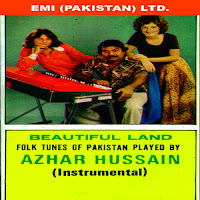 Azhar Hussain - Pakistani keyboardist
I don't know much about Azhar Hussain other than he is a Pakistani pianist and composer. Learning about Omar Khorshid had inspired me to seek out other middle eastern sounding music. A search for "folk music of Pakistan" led me to a surprisingly cool sounding album called Folk Music of Pakistan Vol 2. It does not sound like you think it would. No artist names are credited on the Spotify listing, so I did some more research and found out many of the best tracks were by a musician named Azhar Hussain.

That led to a 1970's Azhar Hussain album called Beautiful Land. The full title is Beautiful Land, Folk Tunes of Pakistan Played By Azhar Hussain (Instrumental). The record label EMI (Pakistan) Ltd. is probably worth researching in its own right because of its involvement in Pakistani Airlines PIA Inflight Music which from what I can tell was instrumental music recorded, curated, produced and distributed exclusively for the airline. This PIA music was often funky and exotic. A guy has a whole YouTube channel devoted to it: https://www.youtube.com/user/kamranacacpa/videos 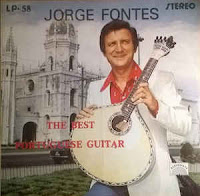 Jorge Fontes - Portuguese Guitarist
I know nothing about Jorge Fontes, primarily because there appears to be absolutely nothing about him written in English online. He's only being mentioned because I found an old Jorge Fontes LP called The Best Portuguese Guitar in the two dollar international bin of a dusty used record store. The Portuguese guitar that Fontes plays has the teardrop shape of a large mandolin, kind of like a cittern. It is notable for its unusual Preston style tuning machines, which apparently involve turning the top screw so that a hook can tune the string.

The LP I found plays clean with no clicks or pops and is full of fantastic melodies in a style that sits in-between Spanish and Greek music. Spotify has a only a few albums by Jorge Fontes containing basically the same assortment of tunes as on the old LP I got. With help from Google Translate I've learned that Jorge Fontes was born in Vila dos Carvalhos, Pedroso parish, Vila Nova de Gaia in 1935, and died in 2010. The internet also says that Jorge Fontes performed for 29 years in the Arcadas do Faia and O Forcado Typical Restaurant in the Bairro Alto neighborhood of Lisbon, Portugal. 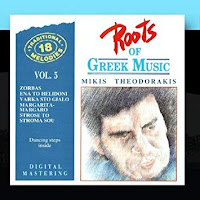 Mikis Theodorakis - Greek composer
On the same day I found that Jorge Fontes record, I also found an album called Syrtaki Dance Greece I Love You instrumental bouzouki music by Mikis Theodorakis. A search for Mikis Theodorakis on Spotify reveals dozens of albums, none of them the same as the one I found. The most similar sounding one might be Roots of Greek Music Vol. 5.

Mikis Theodorakis was born on the Greek island of Chios, in 1925. In addition to popular songs such as "Zorba the Greek,", he wrote symphonies, cantatas, ballets and operas. He also composed the soundtrack for the movie Serpico. I suppose the album I found in that shop contains instrumental versions of songs he had written that were hits in Greece. It contains some fantastic melodies, but I'm not sure if Theodorakis is the one playing bouzouki on it or not.

***
Email ThisBlogThis!Share to TwitterShare to FacebookShare to Pinterest
Be a Fan
Posted by Tanner Llewellyn at 10:37 PM